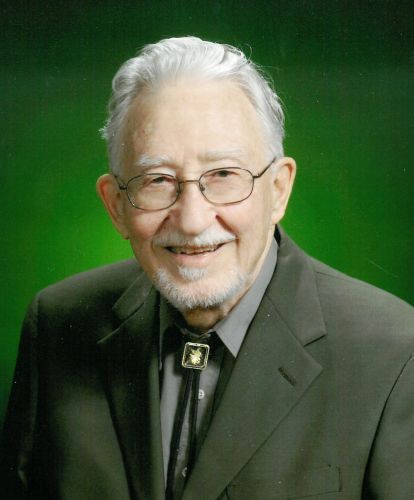 Earl Hammond, age 90, died on May 10 at Northcrest Health Care after a long, productive and rewarding life. Visitation will be at Grandon Funeral and Cremation Care 414 Lincoln Way Ames, Iowa from 5 to 7 pm on Monday, May 15. Memorial services will be at 11 am on Tuesday at First Baptist Church 200 Lynn Avenue, Ames, Iowa.
Earl was born in Terrell, Texas on November 21, 1926, to Joseph Carroll Hammond and Kate Gullette Hammond. He attended and graduated from Terrell schools, then went on to the University of Texas at Austin, where he received his BS and MS degrees in chemistry. He continued his studies at the University of Minnesota where he received a PhD in biochemistry in 1953. With an offer from Iowa State College, he moved to Ames where he taught cheesemaking and food chemistry, and did research on fats, oils and lipids for the next 50 years. He officially retired in January 2003, but continued to do research and work with students until 2014.
While a student at the University of Texas he got called into the army in 1946. He served for one year in New York and Washington. He returned to Austin, and was working on his M.S. degree when he met Johnie Wright at the University Baptist Church. Following a long courtship, they were married at University Baptist Church in Minneapolis on September 17, 1951. After completion of their degrees they moved to Ames where they have spent the rest of their lives.
Earl was an active member and frequent teacher at First Baptist Church. He was a founding member of Story County Housing and Ames Ecumenical Housing and contributed his time to providing affordable housing for low-income families. He also loved to play recorder and played in small groups for many years. Earl and Johnie enjoyed international travel and frequently took along one of their grandchildren when they visited other countries.
Earl's research on lipids was awarded honors on several occasions by the American Oil Chemists Society as well as international honors including an honorary doctorate degree from the University of Olzytin, Poland. His work has resulted in over 30 patents and is used in several commercial products. What he loved the most was the opportunity to work with and guide the research of graduate students from all over the world. His love of science and chemistry was reflected in the microscopes and chemistry sets his children received for Christmas.
Earl is preceded in death by his parents as well as his brothers Frank Hammond and Joe Hammond. He is survived by his wife Johnie Hammond of Ames, Iowa, his son Bruce and wife Darla Hammond of Port Saint Lucie, Florida, his daughter Linda and husband Bruce Hanson of Ames, Iowa, his daughter Pam and husband David Fuchs of St. Louis, Missouri, and son Christopher and wife Sandy Hammond of Richardson, Texas, as well as eleven grandchildren and 6 great grandchildren.
The family asks that in lieu of flowers, that contributions be made to the Story County Community Housing Corporation, 130 S. Sheldon.
Private burial is in Iowa State University Cemetery.
Online condolences may be directed to: www.grandonfuneralandcremationcare.com

So sorry for your loss. Earl was my undergraduate advisor while I was at Iowa State in the early 1970s. He also taught me food chemistry at the undergraduate and graduate level and I worked in his lab growing and grinding soy beans for his long-running linolenic acid project and running the ingenious "smell testing" apparatus he constructed for analyzing hog house odors. He also was the Department Head when I returned for graduate studies in the late 1980s. I will always remember him fondly for his kind manner and slow witty Texas humor. I just retired as a professor at Penn State University and I know now how great a professor and person he really was. He will be missed.

I am sorry to learn of the death of my dear friend and colleague Earl. I apologize for having been at a scientific meeting during the visitation and memorial service. I will always cherish my hours of working with Earl on research projects. I fondly remember Earl 'chastising' me not to schedule 8 am research meetings. The bottom line is that we had a very productive and happy time together. I and my colleagues on the project genuinely enjoyed of interactions with Earl. Til we meet again is my comment to Earl!

I was saddened to learn of Earl's passing. I have always felt fortunate to have had him as my major professor for he was a wealth of good advice and support. In addition to being an exceptional scientist, Earl was a wonderful and caring human being with a dry and quick wit. We always looked forward to his Christmas letter filled with important commentary to the his and the world's condition. He will be truly missed.

I'm glad that in thse past few years I couls get acquainted with Earl. We usually had a short visit before the vesper services at Northcrest Health Services. As I'd leave, the gentle not6es of Earl's recorder would follow me out. Bob Farr

Johnie and family, so sorry for your loss. Know that you and your family are in our thoughts and prayers. Deo and Joan Koenigs

Johnie, I'm so sorry for you and your family's loss. Treasure the many wonderful memories you have.

Johnnie, you and your family have our deepest sympathy and prayers. We will always treasure the memory of you and Earl at our house singing and acting out "I am a little teapot" with Lexy and Michaela years ago and the love you have always showed them. Our prayers are with you all-Annette & Darryl, Lexy and Michaela Koudelka

The friends in Poland (University of Olsztyn) were very sad when we learned of the death of Dr. Earl Hammond. Please accept our deepest sympathy.

Johnnie and the Whole Family of Earl. With a deep sadness we have learned of Earl's death. In this diifficult moment we are with you and we will pay on the day of his funeral. You can't believe how much we owned to Earl and his family, hence our sorrow is very very deep. I must say however that on the day of his death and day after he came in my dreams. I did nor understand why and now I know he came to say farwell. My dear friends in this difficult moment we are with you even being apart thousand miles.
Andrzej Babuchowski with wife Malgorzata

We are so sorry for your loss Bruce. sending prayers your way. Pat & Doc Courtwright

My sympathy to the family and especially, Johnnie, with whom I have been involved in seveeral ways through through her long to,e as a public servant. He was a talented man whose work and other activities were of great service to others. Johnnie is a warm and very caring person as was he.

The attached photos are added to the memorial of Earl Hammond to help share their legacy.

Please help memorize Earl Hammond by recording your attendance below.

Thank you for sharing your memory of Earl