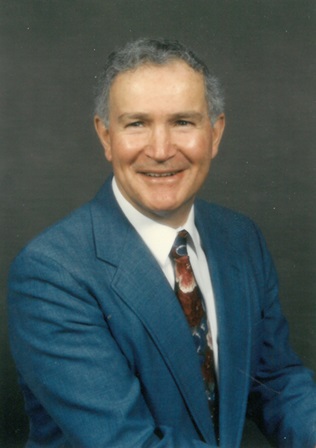 William W. Wunder, 87, of Ames, died on June 18, 2017 at Israel Family Hospice House in Ames. A visitation will be held on Sunday, July 9 from 2:00-3:00 pm in Sarah Barlow Lounge of Collegiate Presbyterian Church in Ames. A service of witness to the resurrection will be at 3:00 pm in the sanctuary, followed by an ice cream social reception in the Social Hall.

Bill was born June 4, 1930 on the family farm near Lake Park, Iowa, to Herman Wunder and Elizabeth (Sell) Wunder. The second child and the oldest of four boys, Bill always loved the farm. As a young teen he took a particular interest in increasing the family dairy herd's productivity so that in a few years they had one of the best producing Holstein herds in Dickinson County.

After graduating from Lake Park High School in 1947, Bill continued helping on the farm. He was drafted into the Army in 1952, serving as Company Clerk of the #558 Amphibious Truck Unit in Incheon, Korea.

Bill used the GI Bill to attend Iowa State College in 1954. While a student, Bill was on the Dairy Judging Team and did so well academically his professors encouraged him to consider graduate school. He also sang in the Iowa State Singers and the Alumni Hall men's quartet, and was active in Westminster Fellowship at Collegiate Presbyterian Church, where he made lifelong friends and met his bride, Beth Robie.

Bill graduated in 1958 after helping to win the Intercollegiate Dairy Judging Team National Contest that fall. He returned to his dream of dairy farming but the farm economy was poor, so he followed his professors' advice and applied to graduate schools.

On March 13, 1960, Bill and Beth Robie were married at the United Presbyterian Church in Clarion, and then headed to East Lansing where Bill began graduate work in Dairy Science at Michigan State. After completing his Ph.D. in 1967, the family moved to Bowling Green, Kentucky where Bill was a Dairy Specialist with University of Kentucky Extension. In 1968, Bill began as Assistant Professor of Dairy Science at Iowa State University.

Bill was proudest of the relationships he built with students through teaching, academic advising, the Dairy Science Club and coaching the Dairy Judging Team. Coaching included travel to dairy farms and contests, allowing him to build relationships with students and dairy farmers. In 1984 was recognized with an award for outstanding academic advisor. Bill also oversaw the ISU Dairy Farm's breeding program, greatly improving the herd average over the years. He retired in 1997 as full professor.

Family came first for Bill and he was a wonderful father to Bob, Michael and Lori, serving as 4-H leader, helping with paper routes, and supporting their many other activities. Summer vacations were spent in their pop-up camper exploring national and state parks. His five grandchildren were his delight and he was always willing to read a book or play a game.

Collegiate Presbyterian Church was an important part of Bill's life; he served as elder, deacon, youth group leader, and tenor in the choir. In retirement Bill joined Golden Kiwanis, serving as president and singing with the Golden K Singers.

In 1999, Bill survived an aortic aneurysm and viewed the last nineteen years as a gift, enjoying children's marriages, grandchildren, and many wonderful trips with family and friends. His garden is the envy of the neighborhood, especially the leeks. He loved reading and learning new things. He was a hard worker and a loving, caring, gentle man.

He was preceded in death by his parents; sister, Joyce Jensen; and brother, Dennis Wunder.

The family would like to thank the staff at Mary Greeley Home Hospice and the Israel Family Hospice House for their excellent, compassionate care.

In lieu of flowers, memorials may be directed to Collegiate Presbyterian Church, Israel Family Hospice House Endowment (through MGMC Foundation, 1111 Duff Ave., Ames, IA 50010), or the charity of your choice.

My deepest sympathy for the loss of a fine man. I knew and admired Bill through CPC. May the pain of your loss be buffered by many happy memories.

Karlene and I were privileged to get to know Dr. Wunderlich and Beth while we lived in Ames. Bill and I worked together with the University Ministry group for three years. We also spent time discussing his many visits to Allamakee County to the area dairy farms with his ISU Dairy Judging teams. In my time as a veterinarian in Allamakee County, I knew the dairies and their owners and their animals. I know Bill was a great role model to his many students. The Power of One as he lived his life and his Christian values. I feel blessed to to have known Dr. BIll Wunder.

To Beth & family: Our very deepest condolences to each of you. Bill a distant cousin of my mom (Ruth 'Ma' McHone) and a good friend of our family. Personally, some of my fondest memories are of Bill as my Coach on the Iowa State Dairy Judging team. Glenda Fike and I were the first 'women' on to breach what was formerly an all guys thing way back when. He was a real Gentleman and will be missed by myself and all of the McHone family. Our hearts go out to you
Meredith (Mert) McHone-Pierce

Deepest condolences to the Wunder family and particularly to my classmate Bob. In church I recall your father had a remarkably powerful singing voice. Best, Reid Applequist

Bill was a kind and caring man . He will be truly missed. Jon Knight

My prayers are with the family, most especially Beth. I am not sure if you remember me, but JoAnne and I were classmates and good friends growing up. I have very fond memories of the Robie family.
Donna Whitty Monkelien

My deepest condolences to the Wunder family. Dr. Bill was on staff when I was at ISU, and was my judging coach. I have so many fond memories of Dr. Wunder that make me smile to this day. He had such a kind heart and giving personality. He and my parents were good friends as well.

My deepest condolences to the family. I met Mr. Wunder a couple of times while Lori and I were in seminary together. A life well lived, to be sure. Jon Bassinger-Flores

The attached photos are added to the memorial of William Wunder to help share their legacy.

Please help memorize William Wunder by recording your attendance below.

Thank you for sharing your memory of William