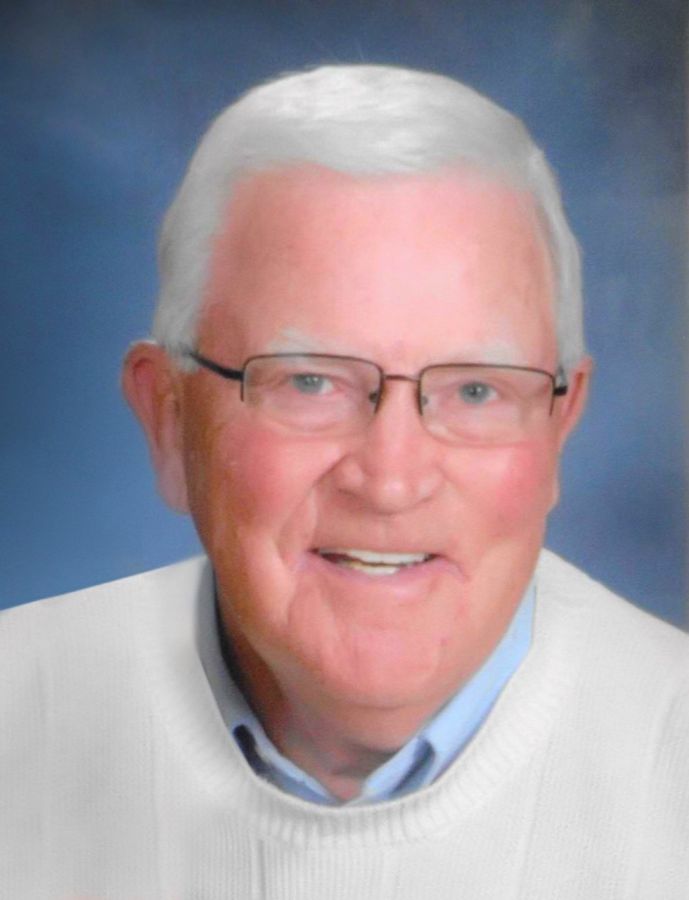 Darrel W. Rensink, age 82 of Ames, Iowa (formerly of Sioux Center), passed away at the Israel Family Hospice House in Ames on March 10, 2020.Visitation will be at Grandon Funeral and Cremation Care, 414 Lincoln Way in Ames on Sunday, March 15 from 2-4 p.m. Funeral services will be at Ascension Lutheran Church, 2400 Bloomington Road, in Ames on Monday, March 16 at 2:00 p.m. with the Reverend Roger Twito officiating. A visitation will also be held at Memorial Funeral Home, 12 16th Street SE in Sioux Center on March 17 from 5-7 p.m. Interment will be March 18 at Memory Gardens in Sioux Center.
Darrel W. Rensink was born on August 13, 1937, on the family farm Northeast of Sioux Center, Iowa. He was the son of Gerrit and Cynthia (Sandbulte) Rensink. Raised on the farm, he attended Country School Welcome #7 through the 8th grade. He graduated from Sioux Center High School in 1955, and Northwestern Junior College in 1957.
One of Darrel's early hobbies was playing fast pitch softball in Sioux Center. During one game, his teammates found him missing in the dugout between innings, but quickly discovered him talking to a lady in the bleachers. On March 10, 1959, just a short year later, Darrel was united in marriage to that special lady, Johanna "Jo" Pap at the First Reformed Church in Sioux Center, IA. They raised 5 children and lived in Sioux Center until 1987.
Darrel's passion in life was public service. Mentored early by Mayor Maurice Te Paske, "Maury" wanted him to use his spare time to become politically and socially engaged, which would help to reward and benefit his community and the people he served. He applied this advice throughout his entire career. Darrel started as an Office Manager for the City of Sioux Center in 1958. He then took on the jobs of Director of Public Works and Community Development. In 1973, he became the City Manager of Sioux Center. Making sure to stay engaged while being City Manager, he also served as President of the Sioux Center Hospital, Commissioner with the Iowa Economic Development Authority, Commissioner with the Iowa Department of Transportation (DOT), Board Member with the Iowa Health System Agency and the Iowa League of Municipalities. All of this previous dedication was instrumental, when Governor Terry Branstad appointed him as Director of the Iowa DOT in 1988. This was the job he loved the most, and he always gave the credit for this love to the 4,000 dedicated employees that made a positive impact on transportation for the people of Iowa. Still with the DOT, he also presided as Chairman of the National State Railroad Officials, and President of the American Association of State Highway Transportation Officials (AASHTO). In 1999, he received the nation's highest honor for Transportation by winning the George S. Bartlett Award.
After retiring from the DOT, he continued his public service, and took an interim position as the City Administrator of Boone, IA. After two years in this position, he stayed with the City of Boone for six more years and served as their Director of Economic Development, and President of the Central Iowa Expo Board. One of his proudest accomplishments was securing the location of the National Farm Progress Show to Boone.
He finished his 62 years of public service working as a volunteer for Mary Greeley Medical Center in Ames, amassing 3,000 service hours with them. He was honored as the Ames Tribune "Unsung Hero" in 2013.
An extremely loving husband, father, grandfather and great-grandfather. He had a soft-spot for family that was very apparent for those close to him. Family always came first, and work was always his second priority when it interfered with attending activities of his children and grandchildren. To him, getaways to attend an athletic event, a concert, or a recital were perfect vacations.
He was also an avid golfer and bowler. Never a hole-in-one, and never a perfect game, but it wasn't from lack of effort. He loved these hobbies and appreciated all of his golfing and bowling buddies over the last 60 years. His annual golfing trips to Omaha were also cherished memories, and he always looked forward to his daily coffee group in Ames. His other priorities involved his beloved St. Louis Cardinals and his Iowa State Cyclones. A season ticket holder, he was a familiar face at Iowa State Football, and Men's and Women's basketball games the past 30 years. He also served as President of the Ames/Story County Cyclone Club.
Darrel is survived by his wife, Jo of Ames, IA; five children: Darren (Lisa) Rensink of Sioux Center, IA, Beth Rich of Ames, IA, Leah Vander Zwaag of Ames, IA, Lyle (Laura) Rensink of Rockford, IL, Lonna (Brandon) Sumner of Brimfield, IL; 10 grandchildren and 3 great-grandchildren. Also survived by two brothers; Wilmer (Marilyn) Rensink of Sioux Falls, SD, and Carl Rensink of Moss Point, MS.
He was predeceased in death by his parents, Gerrit W. and Cynthia Rensink; a twin brother Donald E. Rensink; a son, Loren W. Rensink; brother Milton J. Rensink; and grandson Derrick A. Rensink.
Memorials may be directed to Ascension Lutheran Church, 2400 Bloomington Rd, Ames, IA 50010; or the Israel Family Hospice House, 400 South Dakota Ave, Ames, IA 50014 Online condolences may be directed to: www.grandonfuneralandcremationcare.com

4 people have supported the family by purchasing them flowers or gifts from the Healing Registry.

Jo and family, my heartfelt sympathies to you all on Darrel's passing. He/my late husband, Jack Gordon, were born the same year.

He was an exceptional DOT director! He walked past my office daily on his way to his VIP office in "walnut row". He always had a smile on his face, great laughs, and wanted 1 on 1 relationships with his employees.

I remember once running into him in our office area asking "are you still ACTING director?" YES, he said with the big broad smile on his face ;)

When TQM, TOTAL QUALITY MANAGEMENT, was developed and on-going for 2 years, I was the Ames secretary rep on the 75 member group. I was very vocal; he was always gracious with open ears to what we had for constructive criticism to make the DOT a better place to work.

Betty Gordon, Rail and Water/Development Support secretary while Darrel was at the DOT.

I was so sorry to read about Darrel's death. God must have needed another volunteer in Heaven. He was a caring person and gave of himself in so many ways and was a wonderful leader of the DOT. I believe the last time I saw Darrel was when he came to visit me in the hospital last February after falling on the ice and requiring hip surgery. He told me about being neighbors with Dr. Sneller and assured me that if any doctor could get me back on the golf course, Dr. Sneller could. Darrrel knew I shared his love of golf. My condolences to you Jo and your family. John Nervig (42 years at the DOT)

I am so very sad to learn of Darrel’s passing. I always looked forward to seeing his smiling face and our hugs while at choir at FUMC. Jo/family - I will keep you in my prayers during this difficult time. Sincerely, Stacy Smith

Darrel became director of DOT just after I started at the Office of Driver Services. It didn't matter that I was clerical staff and he was the department director, Darrel always made time to say hello and would often stop by my desk before his meeting with the office director. He mentored me throughout the years and asked my opinion on DOT projects completed in areas I traveled (one time I think he probably wished he hadn't asked). He was a genuinely good man. Jo and family, I hope you'll find comfort in your memories, each other and in knowing Darrel left a indelible mark on the world.

I had the chance to work with Darrel at the City of Boone. Truly a dedicated man. He had class. I will miss him. Don Batt.

Darrel was an excellent Director, great person and had an infectious smile. He cared about employees and he was kind to everyone. Darrel has taken the road to heaven and one day we will see him again. I send my prayers to his family. Sincerely, Kay Anderson

He was a wonderful man and a great friend. We will never forget when Darrell was a commissioner. We would have get togethers before the Iowa State/Iowa football games. At that time Darrell was a HAWKEYE fan!!! We had fun exchanging jokes about each other’s teams. He will be deeply missed.

Jo and family, our deepest sympathies to you. Darrel was the best Director in our 32 and 39-year careers at the DOT. He was very personal and engaging with the employees and truly cared about the DOT family. I will miss seeing him every Tuesday at Mary Greeley where we volunteered on the same shift. We can’t say enough about his character and friendliness. We especially remember meeting up in Maui at the Mercedes Golf Tournament in 2005. May God be with each of you during this sad time. Sincerely, Ron and Kathy Ridnour

Craig and I are saddened to hear of Darrel's passing and our prayers go out to his family. Darrel was such a gracious, kind leader -- we had so much respect for him! We were always happy to visit with Darrel after he retired. He always had time for others and sharing a laugh with him was always good. God Bless. Peggy and Craig Riecken

Jo and family, we are so sorry to hear of Darrel’s passing. He was such a wonderful guy. We both worked at the DOT when he was the director. Tom also bowled with him. And, of course, his rivalry with the Detroit Lions against Tom’s Packers. He always had a smile. He will be missed. Our thoughts and prayers are with you. Tom and Sue Brekke

He was the director when I started with the DOT. He was one of the warmest and most sincere people I have ever met. My condolences.

He was the best DOT director in my 33 years there. Always friendly to everyone with a smile on his face.

A wonderful man. Our sincere hugs and love to the family. John and Cheryl Abrams

The attached photos are added to the memorial of Darrel Rensink to help share their legacy.

Please help memorize Darrel Rensink by recording your attendance below.

Thank you for sharing your memory of Darrel