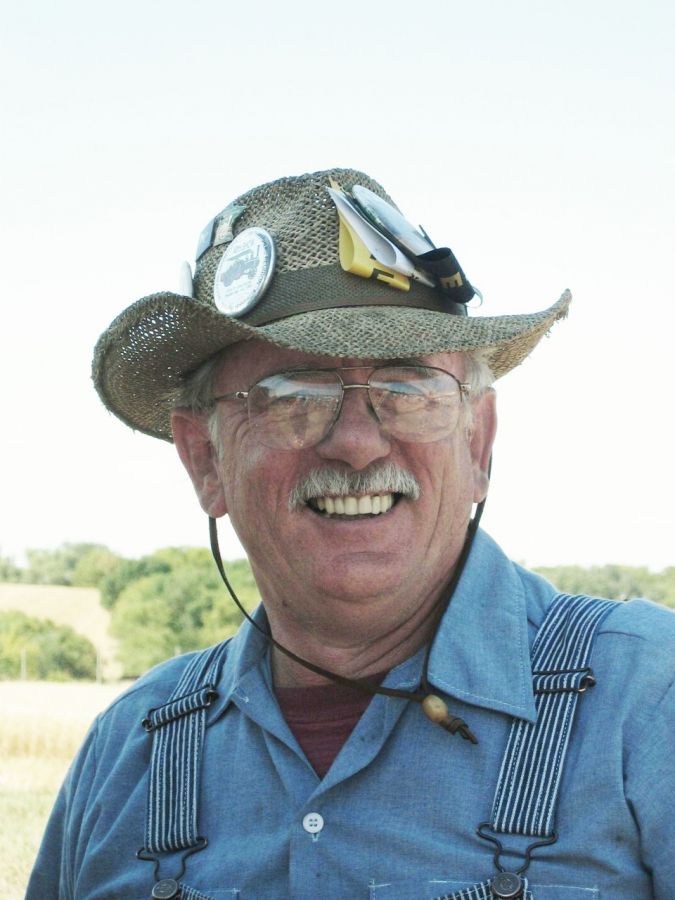 William "Bill" Nelson, 79, of Ames, IA formerly of Fargo, ND and Lake Park, MN went to be with the Lord on Wednesday, May 20, 2020. Due to federal and state guidelines for COVID-19, a Celebration of Life will be held at a later date in MN.

William Charles Nelson was born on February 25, 1941 to William and Charlotte (Thompson) Nelson in Fargo, North Dakota. He grew up on a farm in a close-knit, farming community near Rollag, MN and attended a one room schoolhouse for six years and Hawley Public Schools for six years. Bill had an active childhood that included various shenanigans with his many Norwegian cousins and Rollag friends. The Nelson family were founding members of the Western Minnesota Steam Threshers Reunion (WMSTR) that is held annually in Rollag, MN. Bill loved and grew up with steam engines and old gas tractors and had been involved with WMSTR from 1954-present. He operated his uncle Norman's miniature steam engines during the first WMSTR show. "Dr. Bill" spent many happy years' on his Gaar Scott steam engine and was often seen getting around the show grounds on his bicycle.

On November 1, 1969, Bill married Karen Harris and shortly thereafter they left for Brazil, where they lived for 16 months while Bill was collecting data for his PhD dissertation. After returning from Brazil, they established their life in the Fargo area, where they had two children, Jenny and Scott. Bill was a member at Valley Christian Church in Moorhead, MN and served in various positions there for many years. Bill was a board member of the Clay/Wilkin MN Deer Hunters Association and served on the Board at the Western Minnesota Steam Threshers Reunion.

Bill received his Bachelor of Science degree from North Dakota State University and graduate degrees from the University of Arizona and Ohio State University. He was a professor in the College of Agriculture at North Dakota State University for 33 years and retired in 2004 with emeritus status. Bill had a passion for teaching and taught 20 different courses covering topics such as Environmental Economics, Farm Finance, Cooperatives and Agriculture Policy. Bill took great pride in his students' successes and enjoyed following their careers after graduation. In addition to teaching, Bill maintained a very active research program in the areas of cooperatives and international agribusiness. As part of this work, he traveled to Japan, South Korea, India, Russia, Ukraine and Belarus to promote cooperative development in these countries.

Bill held several administrative positions at NDSU, including Director of the Center for Cooperatives, Director of International Research and Development, Director of the Institute of Natural Resources and Economic Development, Chair of Faculty Senate and the N.D. Association of Faculty, charter member and first president of the statewide Society of Higher Education Professionals and Provost of Tri-College University. Bill was co-founder of Mid-America Consultants International (MACI) and continued to work with MACI for many years after his retirement from NDSU. With MACI, he conducted over 50 international training programs for professionals from more than 40 countries. Topics covered in these programs range from bee keeping and honey processing, making and marketing cheese, cooperatives, biofuels, distance education and various aspects of agricultural policy. In his free time, Bill enjoyed travel and many outdoor activities such as fishing, hunting, biking and kayaking. Bill and Karen traveled extensively both in this country and overseas. In later years Bill and Karen moved to their lake home on Middle Cormorant and especially enjoyed the times when their grandchildren came to visit.

Bill treasured his family, enjoyed life and lived it knowing that he was in God's hands. He had a joy in life that had a meaningful effect on the people he met and will be dearly missed by many.

Bill was preceded in death by his parents, William and Charlotte; brother, Roger and sister, Shirley (Nelson) Leary. The family wishes to thank the staff at Heartwood House for their care of Bill this past year.

Karen & Family, My deepest sympathy to you and your family.

Karen & Family,
I was also an original founder of MACI. I knew Bill for many years working on various International Projects. What memories it brings back including opening the Parade and his work at Rollag. Bill was a highly proficient academic yet very down to earth working on his old tractors and steam engines. He will be missed by all who knew him. My Deepest Sympathy to the Family. God Bless.
Glenn Pueppke
Erie, North Dakota

Karen and Family. I was a colleague with Bill for many years, and am still here. He will be long be remembered by me and others affiliated with our department, industry and University. You should be very proud of his accomplishments. I will miss him dearly as both a friend and colleague.

Karen & Family,
We were greatly saddened to see that Bill has passed away. I was a student of Bill's while I majored in Ag Economics in the 1970's … Bill was the stand-out personality & professional Professor in the Ag Economics department, all of Students loved him and appreciated him. When I met the gal I'd become engaged to 5-years after my College Graduation * I took her up to the Ag Econ Department to introduce my fiancée to Bill. The crafters of the Obit for Bill told the perfect truth of what he stood for, his passionate interest in life and his students. You lost a wonderful family member and so did all of the remainder of the World.
God Bless you and your family. In Heaven, another very unique Steam-Engine operator with a strong Norwegian accent wearing a perfect smile has arrived.
Mary Ellen & Dale Reimers
Jamestown, North Dakota

Karen we hold you and your family in our prayers during this difficult time.
Bill was always an interesting fellow to listen to, and you both are missed at the lake.
Your neighbors on Victory Road.
With deepest sympathy,
Budd & Carol Mermon

Karen and family: So sorry to hear of Bill's passing. I was a student of his back in the 70's and my daughter worked for him when she was a student. He was a favorite professor. Saw him many times at the Steam Threshers Reunion and when my son was young, he had us ride through the parade with him and Scott, and of course, the dog! To my family he was the star attraction at the reunion. It was an honor to have known him. Our thoughts and prayers are with you.
Allan Lutgen and family

Thank you for such a detailed obituary. I was pleased to learn more about his fulfilled life and deep values. My condolences to Karen, Jenny, Scott and their families.
Patricia McDonough (Dean' mom.)

Karen and family, It is with great sadness to hear of Bill's passing. He was a great neighbor and friend on Middle Cormorant Lake. We so admired him for his background in Education and all that he accomplished in his Field all around the world and in this great country. But most of all he is admired for his passion and love of the Western Minnesota Steam Threshers Reunion organization. Bill was a wonderful man and will be greatly missed.
God Bless you Karen,
Rick and Jo

Karen and family, Kathy and I want to extend our condolences. Who would have thought my favorite Ag Econ professor would become my neighbor and friend on Middle Cormorant Lake. Later he would bring foreign delegations to meet with me at CHS to better understand global agricultural issues. So many good memories of such a good man. Good bless!
Lynden

Karen and Family: Sue and I were saddened to read of Bill's passing. It is amazing how the years fly by. I remember well the years that you worked for our law firm and you would tell us that Bill was off again to some foreign country to practice his skills to make life better for others. And the time and enjoyment that he had with his involvement with the yearly Steam Thrashers Reunion. Bill has left an amazing legacy that will live on forever. Please accept our thoughts and prayers during these difficult times.
Shalom, Tom and Sue Van Osdel

Karen & Family, Thinking of you during this difficult time. Bill's life story and contributions to the world are an amazing legacy. Extending to you our sympathy and wishing you peace and comfort. Ken & Kathy Fredette

So sorry for your loss, may God bring you comfort at this time and in the coming days.
Corrie Jones

Karen, Scott, and Jenny,
So sorry for your loss. Bill was a great man, organizer, Christian, and friend. We had good times in Bible study, Sunday School, Mission meetings, and fun times at the lake. The time he set the pontoon boat on fire was most memorable. His love of his dogs told me just how good a man he was. Though parting is hurtful, we will all be together later. We should roast marshmallows and go for a boat ride. No life preservers required! Nancy n Tim shappell

We are so sorry to hear about Bill's passing. Doug and I fondly remember the time when we stayed at your home when we promoted the Minnesota Christian Convention to the Valley Church Congregation. You both treated us royally. In later years we enjoyed seeing you both when we visited at Valley on our way home from Saskatchewan.

We are so sorry for your loss, and we pray that God's arms will wrap around you and strengthen and comfort you in the days ahead, particularly since you cannot have a memorial service at this time.

Jon and I have very fond memories being neighbors North of Moorhead. So sorry to hear of Bill’s passing. Our condolences to Karen and the whole family.

Duane and I always enjoyed our visits with your parents when they visited at Living Light! Your Dad Was a good man!

The services for William have not yet been added. Please sign up below to be notified when the services are ready.

The attached photos are added to the memorial of Bill Nelson to help share their legacy.

Please help memorize Bill Nelson by recording your attendance below.

Thank you for sharing your memory of William