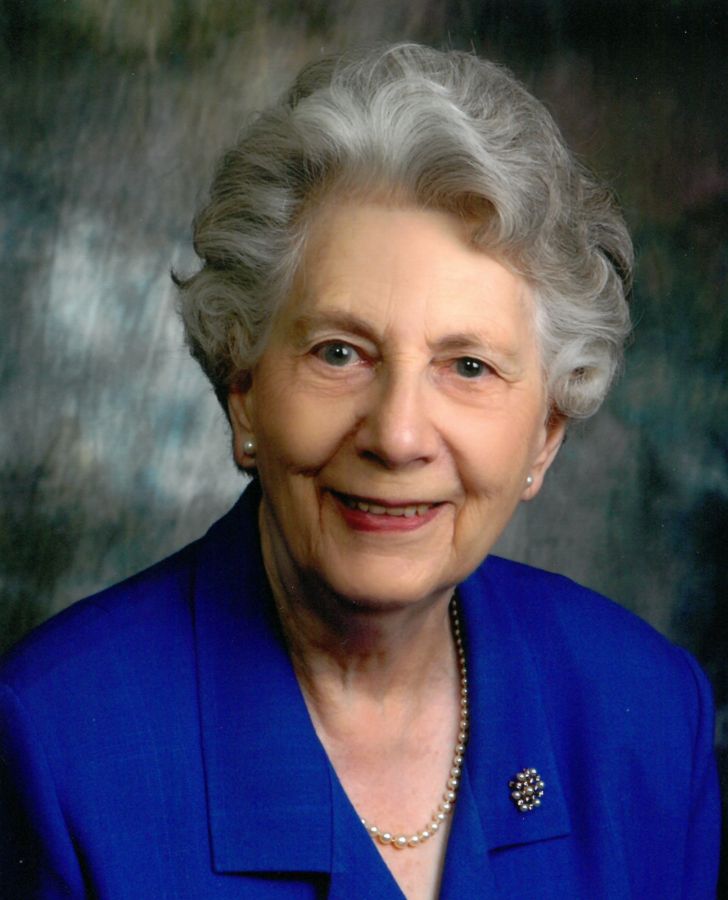 
Virginia Hartwell Davidson Richards, 93, died of heart failure on July 22, 2020, at Green Hills Health Care Center in Ames, IA, with her daughters by her side. Virginia was buried next to her husband in a private burial on July 28, 2020 at the Ames Municipal Cemetery. A memorial service, originally postponed due to the corona virus pandemic, will be held at Collegiate Presbyterian Church, 159 Sheldon Ave., Ames, IA, on Saturday, July 17, 2021, at 11:00 a.m., followed by fellowship and a light lunch at the church.

Virginia was born July 18, 1927, in Rochester, NY, to Virginia Hartwell Hearding Davidson and Otto Conrad Davidson, Jr. Virginia grew up in Rochester and graduated from East High School in 1945. The family spent many summers living with her grandparents in Duluth, MN, which Virginia considered her second childhood home. Virginia attended Wellesley College in Massachusetts, graduating in 1949 with a degree in History. She pursued graduate studies at Columbia University and Union Theological Seminary in New York City, graduating with a Master of Arts in Christian Education in 1951. She was employed as the Director of Education by the Eliot Congregational Church in Newton, MA, and later as the Minister of Education at the First Presbyterian Church in Poughkeepsie, NY.

Virginia met her husband, Richard (Dick) Kohler Richards, at a church group for young adults that Virginia was leading in Poughkeepsie, NY. Dick and Virginia were married September 8, 1956 in Rochester, NY. Virginia then dedicated her life to being a wife, mother, and community volunteer. The couple first made their home in Wappingers Falls, NY, where they lived in a pre-revolutionary-war-era stone cottage alongside the Hudson River. In 1962 the family moved to Ames, which was Dick's home town. Virginia embraced the Ames community and resided in Ames the rest of her life.

Virginia was a devoted mother and volunteered in many roles supporting her three children as they were growing up. She took many turns as homeroom mother and volunteered at the Meeker Elementary School library. She led Sunday school classes at Northminster Presbyterian Church. She was a Camp Fire Girls group leader and a 4-H volunteer. She was loving and encouraging of her children and praised every accomplishment, large or small. She was their trusted sounding board. She was an advocate for education and encouraged academic achievement.

Virginia was involved in many community activities during her nearly 60 years in Ames. She was active in the philanthropic education organization P.E.O. for more than 50 years, serving as president and holding other officer and committee roles for Chapter AA. She was a third-generation member of the American Association of University Women (AAUW) and held many local leadership positions, including president. Virginia played an instrumental role in the large AAUW book sale which was an annual tradition in Ames. She served for a time as a Wellesley College Alumnae Admissions volunteer, and she was an election poll worker for many years. She joined Collegiate Presbyterian Church when she moved to the Green Hills Retirement Community.

Virginia somehow found time for several hobbies. She was an accomplished seamstress and known among family and friends for her meticulous precision and skill. She enjoyed reading murder mysteries and collecting antiques. She participated in a classical music study group, and she played bridge. She followed current events and read newspapers cover to cover. Virginia enjoyed genealogy, history and travelling to historic places, and she cherished several opportunities to visit family overseas. She was kind and gracious, and she cultivated many friendships.

Virginia was preceded in death by her parents and by her husband. She is survived by her three children Elizabeth Richards (Joe Hardesty) of Albuquerque, NM, Albert Richards (Roxanne) of San Francisco, CA, and Jane Richards of Boulder, CO; five grandchildren, William Richards, Lauren Richards, Jonathan Richards, Jay Hardesty (Rosemary) and Jordan Berry; and three great-grandchildren. Virginia was also survived by her sister, Jean Schallenberg and brother, Otto. C. Davidson, III, as well as a number of nieces and nephews and their families.

In lieu of flowers, donations may be made in Virginia's memory to one of the many non-profit organizations she supported, such as Raising Readers, the Ames Public Library, the Iowa Natural Heritage Foundation, or the Virginia H. Richards Scholarship for Green Hills Retirement Community Employees via the Iowa State University Foundation. Virginia established the scholarship prior to her death to acknowledge the professional and compassionate care she received during her years living at Green Hills. Virginia's family thanks the Green Hills staff for their dedication to their residents and the compassion they showed to Virginia in her declining years.

Because of the continuing pandemic, Virginia's family encourages social distancing at the memorial service and reception. Vaccinated guests may wear masks at their discretion; unvaccinated guests are asked to mask for the safety of others.

Grandon Funeral and Cremation Care of Ames, IA is in charge of arrangements.

To the family of Virginia, My sympathies to you. Virginia was a wonderful neighbor on Paulson Drive for many years. Ed Hendrickson

Beautiful smile and beautiful woman to the depths of her soul. She loved her family dearly and you had a special bond with your Mom. My sympathies and wishing your peace in days to come.

I was so sorry to hear of Virginia’s death since I have been unable to see her for so long. She was a delightful lady, proud of her seminary training & church experiences, always welcoming. I visited her first when she was still living at her townhome. My sympathy to her 3 children & her grandchildren. Mary James

Years ago I knew Virginia Richards from Chapter AA PEO. I remember her fondly as such a lovely, gracious woman. My sympathy to her family, who have lost a special elder member. Ellen E. Holm

I am saddened to hear of the passing of your mother. I so enjoyed her and doing her hair at His & Hers. She was a sweetheart.

The attached photos are added to the memorial of Virginia Hartwell Davidson Richards to help share their legacy.

Thank you for sharing your memory of Virginia Hartwell