Robert "Bob" Borst, 69, of Ames, Iowa passed away on November 18, 2020 at Mercy Medical Center in Des Moines. A funeral service will be held at North Grand Christian Church, 919 30th Street in Ames on Saturday, November 28, 2020 at 1:00 p.m. Due to concern over increasing COVID infection rates, the family will not be receiving friends an hour before the service. Capacity will be limited, masks are required, and social distancing is recommended. Burial will be at the Ames Municipal Cemetery following the service. To view the service digitally, https://us02web.zoom.us/j/8189015211
Meeting ID: 818 901 5211

Bob was born to Clarence and Mary (Finley) Borst in Perry, IA. He grew up on the south side of Des Moines and graduated from Des Moines Tech High School in 1969. He received an associate's degree from DMACC in corrections and a bachelor's degree from Iowa State University. Bob married Becky Smith in 1970 and from that union Nathan was born in 1982. They later divorced.
Bob married Linda Ann Carlgren Paris on June 27, 1992 which expanded Bob's family to include two daughters, Lindsey and Kimberly Paris. Bob's professional career included working as a pre-sentence investigator, probation officer and residential manager in adult corrections in Des Moines. He then worked as the Assistant Director of the Second Judicial District in adult correctional services from 1984 until his retirement in 2009. In 2001, he received the State of Iowa award for Outstanding Correctional Worker. In retirement, he loved visiting his kids and grandchildren. He enjoyed the outdoors, including gardening and refinishing a 1952 Chevy pickup.
Bob was an active member of North Grand Christian Church. He was a compassionate man with a big hug for everyone. Bob loved Jesus, his family, and friends and will be missed by the many lives that he touched.
Bob is survived by his loving wife, Linda of Ames; children, Lindsey (Tony) Zabawa of Omaha, NE and Kimberly Paris of Denver, CO; grandchildren, Alyssa, Emma, and Tony Zabawa of Omaha and Diggory Borst of Gilbert, IA; daughter-in-law, Lindsay (Peterson) Borst of Gilbert, IA. He is also survived by his brother, Terry (Vicki) of Denver, CO; sister, Calli (Don) Fink of Marysville, WA; and sister-in-laws, Barb Borst of Altoona, IA; Sandra (Kevin) Hagen of St Charles, IL; Deb Carlgren of Burlington, IA; and Connie Schrader of Des Moines, IA; former mother-in-law, Nonnie Smith.

2 people have supported the family by purchasing them flowers or gifts from the Healing Registry.

Bob had great energy and would lead a conversation with his insight and a loving ear. He was always concerned for others and had a welcoming hug and smile to share. The lives he touched will forever be better for the moments he made through his actions. May we all live with luck, fight as hard, and give as much. Peace for Bob and all of his family members.

Bob and Bob on the way to the Roll In

Linda--we are so sorry for your loss. We have enjoyed Bob's and your friendship for many years. Bob enjoyed going with your Bob to the Wayne Larson's Roll In when he showed off his newly restored Chevy pickup. We love you. Colleen and Bob Staggs 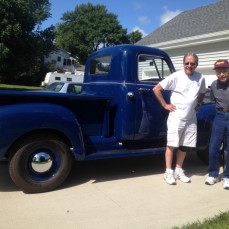 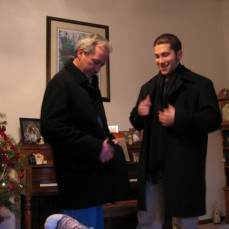 The attached photos are added to the memorial of Bob Borst to help share their legacy.

Please help memorize Bob Borst by recording your attendance below.