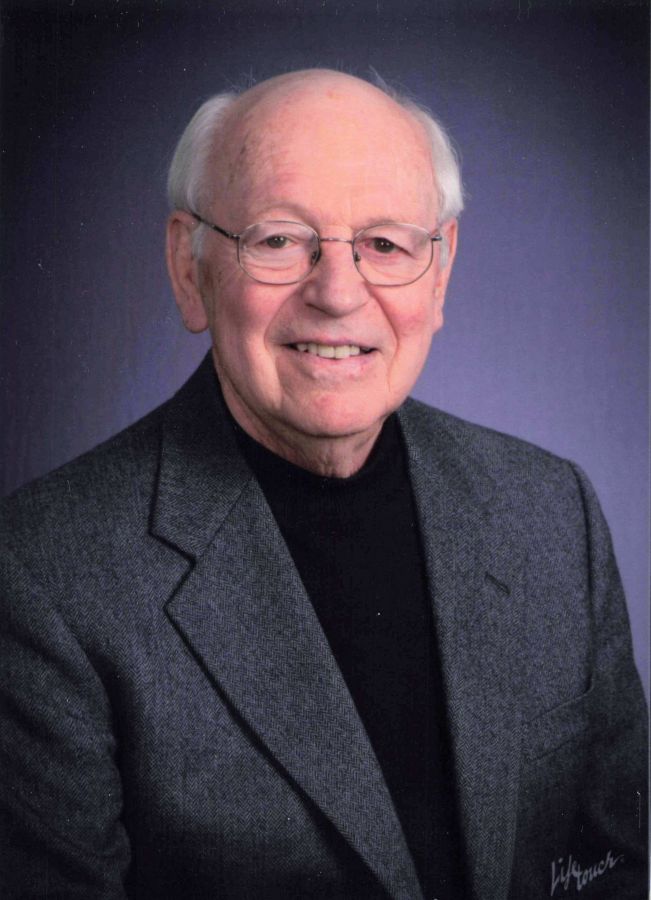 Charles "Chuck" Frederiksen, age 90, of Ames, Iowa, passed away at Israel Family Hospice with his family by his side, in Ames, Iowa. A celebration of Chuck's life will be at a later date in 2021.

Charles Faaborg Frederiksen was born in the Danish community of Elk Horn, Iowa on November 3, 1930, the son of Frederik Verner and Edna Leonora Faaborg Frederiksen. His family moved to Exira, Iowa when he was three, where he attended and graduated from high school as valedictorian of his class. Chuck graduated from Iowa State University with a BS in Zoology and a master's degree in Entomology, and then served two years in the United States Air Force, stationed at Clark Air Force Base in the Philippine Islands. He met Joanne Dolores Bireline of Adair, Iowa, and the couple was married on June 27, 1954 at Immanuel Lutheran Church in Adair. Upon returning from active military duty, Chuck accepted employment at the ISU Department of Residence. For nearly 50 years, Chuck had a distinguished career in the college and university housing profession. He became the Director of Residence in 1967 and retired in 1996. During his tenure at Iowa State, Chuck oversaw the construction, staffing and occupancy of many student housing and dining service facilities, including five residence halls and single and married family apartment complexes. Chuck received two significant recognitions during and following his retirement from ISU. The first was the establishment of the Frederiksen Leadership Award for student leaders living in university housing. The second recognition was the naming of a new housing complex, Frederiksen Court, in April 2002. Frederiksen Court currently houses more than 3500 single undergraduate students in 29 buildings. Chuck was an active member of Bethesda Lutheran Church, as well as in the Ames community, serving in a leadership capacity at the church, Ames Kiwanis Club, Ames Noon Rotary Club, Ames-Gilbert United Way, City of Ames Community Development Board, Ames Cyclone Club and the Ames Convention Bureau Task Force. As a tribute to his Danish heritage, Chuck was a charter member of the Museum of Danish America in Elk Horn, Iowa, serving as a member since its inception, and actively participating on the Board of Directors, including election to President of the Board. After returning from active duty in the US Air Force, Chuck served in the Air Force Reserves, retiring as a Major in 1990. After retiring from ISU, Chuck enjoyed coffee with his friends, volunteering in the community, loving his wife of more than 66 years, and doting on his children, grandchildren, and great-grandchildren.

He was preceded in death by his parents; sister, Patricia Lotz; and son, Pastor Paul Frederiksen.

Memorials may be directed to: Bethesda Lutheran Church, the Iowa State University Foundation for the Charles F. Frederiksen Leadership Award, or The Museum of Danish America (in Elk Horn).

To Joanne and family, we send our condolence on the loss of Chuck. He was held in high regard from the time I played baseball against him in high school, then watched his baseball career and later his career in the ISU housing department. He was a natural for leading the large residence system and dealing constructively with students. We thoroughly enjoyed our several evenings playing bridge with him and Joanne. Chuck left a positive impression on all. You can be proud to be significant parts of his life. Duane and Shirley Acker

I am so thankful to have crossed Chuck’s path. He was respected in the residence life community around the world and he will be remembered for his leadership, mentoring and most especially his kindness. Joanie Schmidt, CMU, Emeritus

Chuck was a heroic mentor during my collegiate days. Serving as an HR and Supervisor of Head Residents brought me close to his invaluable guidance. I seriously considered pursing a career similar to his because of what he brought to so many. I did go to seminary to become an ordained minister and after 41 years of active service still acknowledge those years in the residence halls as among the finest preparations for compassionate leadership through Chuck's guidance and modeling.

Our family became acquainted with Chuck from our mom's years of working at Richardson Court. She loved the interaction with students and staff, remaining friends with many even after retirement. Please accept condolences from the family of Virginia Weeks. Susan Skei, Barbara Mallon and Craig Weeks.

From 1979-1984, I had the privilege of working in the ISU Dept.of Residence. Worked for Gary Schwartz in the UDA and was just a few doors down from Chuck. To say that Chuck and Gary helped shape my understanding of leadership would be understatement. Of all my employment experience to date, my best has been with Chuck and the Dept. of Residence. We were indeed a family and Chuck and Joanne welcomed all of us. Ralph Waldo Emerson, in his definition "What is Success" closes by saying "to know even one life has breathed easier because you have lived - this is to have succeeded". There can never be a question that Chuck succeeded, many times over.

Chuck and Joanne sat in the pew behind ours in the sanctuary at Bethesda Lutheran Church. They almost always were there ahead of us. As we walked past them to sit in the pew in front, both of them would give us big smiles and nod their heads in friendly greetings. It became a sort of warm and friendly ritual to start our worship on Sunday mornings. Thanks to both of you for this. Joanne, we are truly sorry for your loss of Chuck. He was such a good neighbor in the sanctuary.

We will miss you, Chuck. Chuck was my first cousin, on the Frederiksen side of the family, and we lived less than a block from their home when we were growing up. My brother Bill and I were 10 & 12 years younger than Chuck, as were many of the neighborhood kids, and we all admired him. He was an excellent baseball player (pitcher), was involved in music at school and just an all around great guy. He and his sister Pat were the first of our cousins to go to college and they were our inspiration, for sure. Many wonderful memories from childhood, and adulthood as well. Chuck and Joanne knew what the word hospitality really means. We'll miss you Chuck, but we also know that you are now in the Peaceful arms of God. Thank you for being who you were. Wayne Olson

This picture was taken in 1976. My cousin Charles will very much be missed. As a kid, I was really impressed by Charles getting a scholarship to play baseball at Iowa State.

Most influence in my college life and later career advice. He was an amazing person. 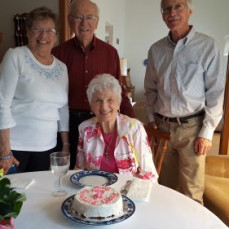 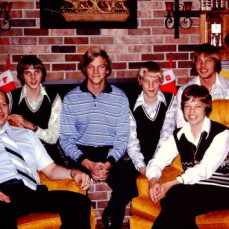 The services for Charles "Chuck" have not yet been added. Please sign up below to be notified when the services are ready.

The attached photos are added to the memorial of Charles "Chuck" Faaborg Frederiksen to help share their legacy.

Thank you for sharing your memory of Charles "Chuck"