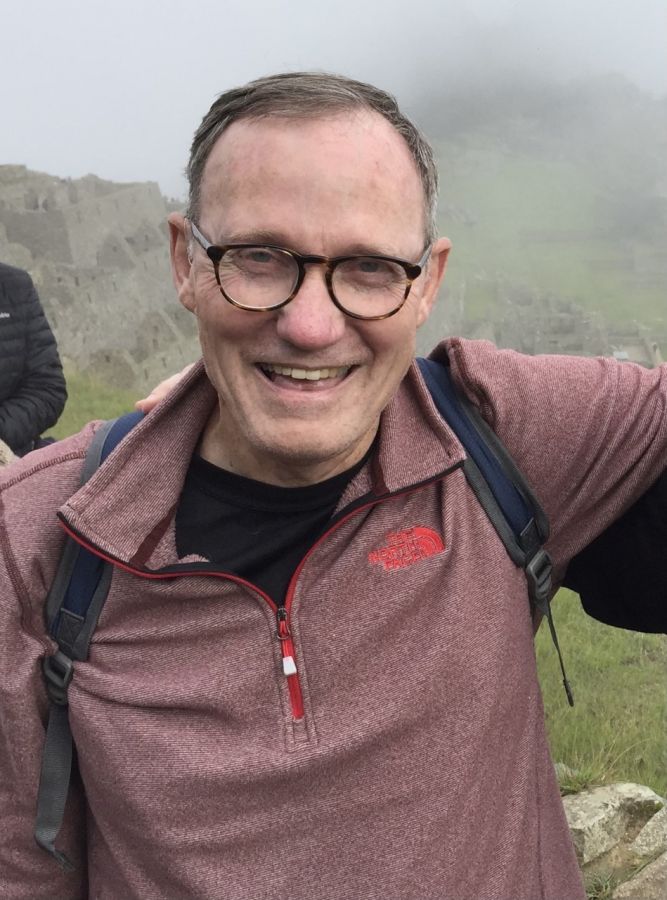 Dennis Eugene Owings, age 72 of Ames, died August 21, 2021 in Kenosha, WI. A celebration of life with smoked meats and libations will be held 11:00 a.m. to 1:00 p.m. on Saturday, August 28. The memorial will be at the Bluestem Shelter in Moore Memorial Park, 3050 Northridge Parkway Ames, Iowa. Please wear bright clothes, bring a story to share and help celebrate Dennis' life.

Dennis was born on June 12, 1949, in Ames Iowa the son of Roy and Mary (Eble) Owings. He graduated from Ames High School in 1967. He then served in the US Army during Vietnam. When he returned home he received his degree in Business from Iowa State University.

He married Ellen Newell on January 13, 1990. The couple had three children, Megan, Maura, and Brian. Dennis enjoyed time with his family, planning their travels all around the world, dogs of any kind and playing games. His favorite place was the family cabin at Ten Mile Lake in Minnesota. In 2017 the Owings family appeared on Family Feud, this was one of his fondest memories. He enjoyed craft beers, fixing almost anything, smoking meat and drinking a little bourbon. His most cherished memories were with his family and his biggest accomplishments were being a great husband, father and papa.

Memorials may be directed to Ten Mile Lake Association in Hackensack, MN or the Ames Animal Shelter.

Prayers and strength to your entire family as you mourn your loss! Brad and I will be praying for comfort to your family!! Brad and Billie Strickler

I worked with Dennis at the post office. I remember he loved the "groaner" jokes that we all liked but played along with. Some of the senior carriers would give him grief about his jokes, which he loved. I for one enjoyed them also. R.I.P. buddy

Denny was the best brother a person could have. He only tried to strangle me once. After our parent’s divorce we didn’t have a TV so Denny suggested we go downtown and buy a game. The only store open was a drug store and it didn’t have a big selection. We bought Don’t Spill the Beans and Statego. Denny was a stickler about game rules. To this day, my children call anyone Uncle Denny if he or she looks at the rule book during a game. I went with him when he went to join the Army, missing a day of school; the only day of high school I missed. I was thrilled when he came back from the military and we started college together. Those college years were some of the best of my life. We were often playing hearts with Mary Stoops and listening to Tapestries by Carole King and Tommie by The Who. I loved it when I could run the cards and give Denny and Mary 26 points. One morning, he was sleeping and I turned on the speakers in his bedroom full bore with Carole King singing, “You’ve got to wake up every morning . . .” He came charging out of his room, but when he saw Mary with me he decided not to kill me and we went on to play cards. We drove to Seattle one summer in his green Renault to see our dad and Pam and her 2 daughters. We drove pretty much straight through. Denny also seemed to love driving places, seeing friends along the way. He drove our mom to Detroit for one of my son’s wedding for which I’ll be forever grateful.
Denny eventually married Ellen and along with her daughter Meghan, they had two more children. Our mom would often babysit them and made cinnamon roles especially for Brian. One time she wouldn’t allow us to eat the cinnamon roles because she was saving them for Brian. Mom loved all of her grandchildren, but I think she was especially close to Meghan, Maura and Brian because they lived so close to her. Denny and Ellen always checked on Mom and brought her treats from Sam’s and Costco. At Christmas, Denny always carved the Turkey and played the obligatory Christmas Day game. It was usually Trivial Pursuit and Denny usually won. One Christmas, we brought Trivial Pursuit Star Wars and Denny even won that, beating my son, Steve, a renowned Star Wars fanatic.
I have so many memories of Denny and almost all of them are happy. We were always very close and he was very much a person who cared deeply about his whole family. He recently called and was tickled to tell me about a family secret he had just found out about. God, I will miss him. Love you, Denny. Marilyn

Ellen and family, Our prayers and sympathy are with you at this time of Dennis's death.

I am so sorry for your loss. I had only spoke with Dennis a few times during gatherings of mutual friends. He was super nice and a fun guy to chat with. Prayers for you and your family.

Ellen-I am so sorry for your loss. I got to know him a little bit from MGMC. My thoughts are with you and family.

When I started carrying in Ames way back in 1994 Dennis was always there to help answer questions especially for someone who only knew the name of a street or two in Ames itself. Senior carriers or rookies could always count on him. I’m happy to say he became more than just a coworker, I considered him a friend. My thoughts to his family, I know you were definitely cherished by him and he was super proud, my sincere sympathies

The services for Dennis have not yet been added. Please sign up below to be notified when the services are ready.

The attached photos are added to the memorial of Dennis Owings to help share their legacy.

Please help memorize Dennis Owings by recording your attendance below.

Thank you for sharing your memory of Dennis