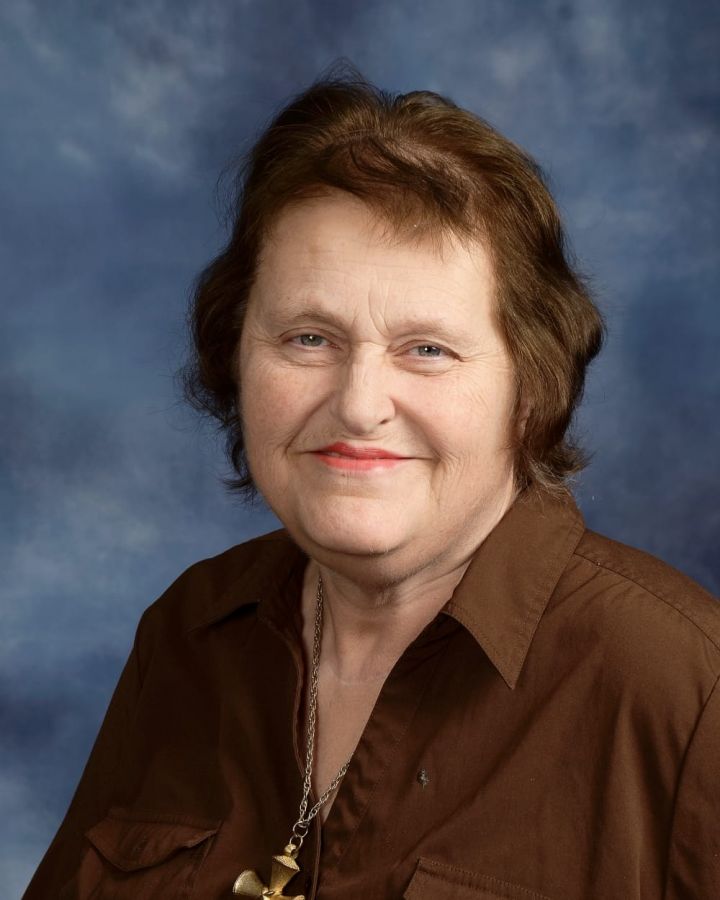 Rebecca Lee Pittman, 76, of Ames died Thursday, Sept. 30 at Stratford Specialty Care in Stratford, IA under Care Initiatives Hospice after a long struggle with dementia/Alzheimer's. Her daughters were with her in her final hours.

Becky was born September 21, 1945 in Ames at Mary Greeley Hospital to James Lee Pittman and Mary Elizabeth (Smith) Pittman. They took her home to a small house that still stands just south of Lincolnway on Washington.

As an only child, Becky was close to her cousins in St. Louis/Alton, IL and Nevada. She often joined her cousins for summers at her Pittman grandparents in Mahomet, Illinois. James had been in the Civilian Conservation Corps (CCC) and was a certified shoe repairman who also rehabbed houses, resulting in many moves for the family including Nevada, Stuart, Story City, Des Moines and Plattsmouth, NE.

When Becky was 16, her mother Mary lost her voice box to a rare cancer and died. After graduation from Plattsmouth High School in 1963 and a broken engagement, Becky returned to Ames, IA with a full time job as an artist for Collegiate graphic arts firm. She also volunteered as a candy striper.

She met her husband Roscoe Catlett when she attended his sister's Kemmerer family picnic in Nevada with her friend and his niece Judy Rainbolt Jarrett Lowe. A friendly ice cube fight served to provide introduction -- and was re-enacted for years afterward on each anniversary in addition to a dozen roses. They were married April 23, 1965, honeymooned at the iconic Flamingo Motel in Marshalltown and relocated to Madrid, IA where they built a two story home together, complete with a special cabinet for her Better Homes and Gardens subscription. Her husband worked for the Boone factory Rolfes painting grain dryers though early in their marriage he drove semi and she travelled with him, once going as far as the border to Canada. He also trained and moonlighted as a shoe repairman (trained by Becky's father) where Becky clerked once they took over Pittman Shoe Repair and opened Catlett Shoes & Repair (Tent Tarps & Zippers). It was there she also showcased and sold her art, as well as did small sewing repairs on the antique Singer sewing machines. They divorced in 1986. Roscoe died Nov. 26, 2003.

She was originally a stay at home mother of two little girls, Mary and Robin. Of this era she once said, "The greatest times of my life were when you girls we========re small." Days were punctuated by morning exercises watching Jack LaLanne and Captain Kangaroo, long sessions of her as patient on a green couch being tended by her doctor daughters complete with little plastic blue medicine bag, tickling and laughing and afternoons watching Another World soap opera from day one and into the heyday of the Somerset spin off or Bob Ross and the "happy little bottle" painter before that. Rainy days meant rearranging furniture. Friday mornings meant a round trip of picking up shoes from drop off points in Boone, Story City and Ames. Friday nights were homemade hamburger pizza ===from a box with one glass of Pepsi as the family watched Hee Haw, Saturday would be visiting cousins in Nevada, Sunday was church and fried chicken with an evening of popcorn or grapes watching Maverick. Saturday mornings meant it was time for all three girls to wash dishes and sing the 1970s hits in a bright gold kitchen calling out variously to Jolene and Proud Mary, asking if they had never been mellow and acknowledging "I'm ok alone but you've got something I need" as they sought a "Brand New Key."

Becky was a CampFire Girls Bluebird co-leader hosting meetings, helping to sell candy door to door and leading the pledge with a small flag she painted (the field of stars could flip up to reveal words to the pledge.) She was certified by the Red Cross and spent summers teaching two sessions at the Woodward swimming pool. She and her husband sold Shaklee and she was a JayCeeEtte in Madrid.

Music was important to Becky. She played a large white accordion with pearl inlay from a young age and into adulthood, often at 7 a.m. on a Saturday and always with her friend Judy as they opined it was good to touch the "Green, Green Grass of Home." Later she learned guitar and enjoyed hosting cards for friends and going out to sing karaoke.

She loved Elvis and anything the color blue and collected books of sheet music. The fastest way to stop her car was at the sight of horses or a garage sale.

The family relocated to Ankeny where they ran their shoe repair, eventually moving it to lower Beaver Road in Des Moines. Around that time Becky attended classes at the Ankeny DMACC off and on from 1978 to 1990 and got a grant as a displaced homemaker to study photography and learn dark room skills. She also trained with her best friend as a dog groomer and supported herself as a certified CNA while living in Ankeny. Inheriting her aunt's home, Becky moved to Nevada with her youngest daughter and eventually graduated from Drake University as an adult in May 1992 with a Bachelor of Arts.

Shortly thereafter she was diagnosed as bipolar, she moved to Ames and benefited from the extensive and innovative Story County mental health programs which were dismantled in 2019 and severely disrupted her level of care. She also became a member of North Grand Christian Church and attended Sunday school and Bible Study.

Her art was always at her side. In Madrid she had tall swivel barstool and a corner desk set up as her easel, always painting and drawing whenever she could. In Ankeny, she had a full art desk and busy corner. In Ames she always kept a second bedroom as her studio.


Becky was an artist from a young age and completed a well-known correspondence course in art. Becky produced art as Becki and R. Lee Pittman, and never limited herself to one medium or style. She painted in oil, watercolor, color pencils and pastels, as well as photography and even tinsmithing, ads and political cartoons. In 1978, she was commissioned to recreate a stylized tiger on a floor length gown. In 1982, she was commissioned to create an art installation for an Ankeny financial company of a bull and bear -- family lore confirms that the bear's vicious teeth were studies of her willing model, the family's chihuahua Lady. She copied "Where The Wild Things Are," children's art, and many Peanuts images, including one of the "whole gang" painted on wood shake shingles from a building that had been torn down. She even repurposed unsold leather insoles as art with the famous characters and the back of her children's bedroom door was the iconic and gleeful dancing Snoopy.

For the last 20 years, Becky maintained a studio in her second bedroom with always more than one project at hand. She met her goal of finishing many pieces and framing them, as well as having a showing in Ames and being professionally represented nationwide in the last seven years of her life.

A long time church goer since St. Paul's Methodist in Madrid and Ankeny Methodist, she read the Bible and attended Bible School and many church activities with her church family at North Grand Christian Church up until the pandemic, but her friends always called upon her and sent cards. Pastor Mike Morton was her last outside visitor the day of her death.

Even in her later days, any mention of her great grandchildren brought up a great smile.

Becky had recently been to Branson, MO and before that she had traveled to see her cousin Carol in the Florida Keys. In the early 90s she also went to Paris, France,

She is survived by two daughters, Mary Catlett and Robin (Steve) Borton, one granddaughter and two great grandchildren as well as three first cousins Carol (Campbell) Watkins of Florida, BettyLou (Campbell) Dalton of Texas and Loretta Ann McDonald of Hawaii.

On Sunday, November 7 there will be a 1 p.m. reception with lemonade, coffee, cookies as well as a viewing of art and memorabilia on display thanks to hosting by Becky's home church North Grand Christian Church located at 919 30th St.

A Celebration of Life service will start at 1:30 pm. with Pastor Mike Morton officiating. The family welcomes any and all stories, photos and memories that family, friends and colleagues would like to share.

Masks are not required but will be respected, appreciated, unquestioned and welcomed for the sign of respect and concern that they are.

In lieu of flowers, her family encourages you to make a contribution to the Salvation Army, Heartland Senior Services or NAMI in Becky's name.

The attached photos are added to the memorial of Rebecca Lee Pittman to help share their legacy.

Thank you for sharing your memory of Rebecca