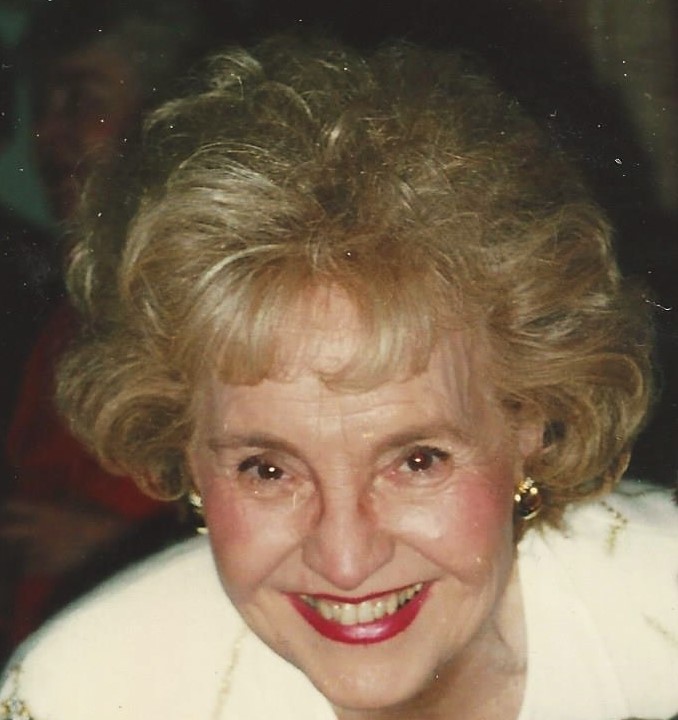 Mary Jane (fondly known as MJ) Clithero, age 93, of Northcrest Retirement Community, Ames, Iowa died of natural causes on February 18, 2022, in Northcrest Health Care. Graveside services at Ames Municipal Cemetery will be on March 26, 2022, at 1:30 p.m. A celebration of life will follow at 2:30 p.m. at Collegiate Presbyterian Church, Ames Iowa.

Mary Jane Erickson Clithero was born in Boone, Iowa on December 19, 1928, to Walter J. and Aline Edwards Erickson. Mary Jane graduated from North High School in Des Moines and then attended the University of Iowa, Iowa State University and Drake University She married Lt. Robert D. Peterson on April 10, 1948. After his death, she married and divorced Col. Harold E. Fischer. On October 31, 1981, she married Thomas W. Clithero. MJ was a long-time Ames resident and was a trailblazer in the field of real estate in the 1970's becoming one of the first female estate brokers, GRI, CRS. She belonged to the Ames Board of Realtors from 1970
to 1982 and served on the Executive Committee of that Board. She also served on the Board of Trustees for the Octagon Center of the Arts from 1986 to 1990 and on the Ames City Council Board of Review. She was active in many other volunteer organizations and was a member of Collegiate Presbyterian Church; Chapter LN of P.E.O.; Theta Chi; and Gold Star Wives of America. MJ enjoyed spending time with family and friends and attending her grandchildren's sporting events and activities. She was the ultimate and a stylist hostess for dinner parties, birthday club, bridge club, tailgates, and family reunions.

She is survived by three children: one daughter Dana L. Peterson Fischer of Ames Iowa; two sons: Kurt E. (Shawn) Fischer of Tivoli, New York, and Clint N (Deanna) Fischer of Ankeny, Iowa. In addition, she is survived by two step-daughters: Anne (Gary) Pickering of Centennial Colorado and Julie (Mark) Ryan of Phoenix, Arizona and one step-son Douglas (Kim) Clithero of Phoenix Arizona. Grandchildren: Scott (Katie) Keefe, Alexander Fischer, Austin (Amy) Fischer, Pascal Fischer, 8 step-grandchildren and 3 great grandchildren with another one due in April. She is also survived by many dear friends including Virgie Cortner and Nancy Franzenburg.
She was preceded in death by her parents, her sister, Teddy J. Ollrich, her brother-in-law Arthur Ollrich, her husbands, her daughter Katherine Ann Fischer, her sisters-in-law Esther (Glenn) Stutzman, Arlene (Doug) Oakleaf, Olive (Larry) Booth, and Lavonne (John) Erickson, two-step grandchildren, and many friends and family members.

Memorial Contributions may be made to the Collegiate Presbyterian Church, 159 Sheldon, Ames IA 50014 or to the Des Moines North High School Scholarship Fund, 501 Holcomb Avenue, Des Moines, Iowa 50313. Please note that your donation is in honor and memory of Mary Jane.

May her memory always bring a smile. It was always such a pleasure to be in her presence. I'll always fondly remember her and her joy of life. One of my favorite memories is her taking Dana and I to the World Trade Center Windows of the World for Thanksgiving.

In the years I knew her, MJ was fun, happy, and a true “Glamor Girl”. She always looked like a million bucks. The last time I saw her was at the Ames History Museum annual benefit event. She was dressed up and having fun. This is how I always remember her. To my friends Dana and Kurt (and also to Clint): you had the blessing of being supported by a talented, hard-working mother who loved you very much. I join you in feeling the loss of such a dear person. May happy memories come to you as you journey through this sad time. God bless you all. ❤️

Mary Jane was a special person to our entire family. She was such a lovely, gracious lady who always had a smile to share. She will be missed and you are in our thoughts for strength and comfort. Wendy and Jeff Herrick

Dana, my sympathy to you and your family. We too miss your mom. She brightened any room with her sparkling spirit and beautiful presence.

Mary Jane inadvertently taught me at an early age how to admire someone. I admired how she could be a very successful realtor, single mother to two young boys (who needed every minute she could give!), active in the community and a friend to so many. Her heartwarming smile and laugh will be missed but it's comforting to know and clear to see she lives on in her children. Dana, Kurt and Clint: my condolences for your loss of a wonderful mom and person.

Mom meant a great deal to me. She referred to me and introduced me as her third son. I cherish the thoughts of her and she will be in my heart, always. Kurt’s (and my) adventures would sometimes turn into trouble, and she was always forgiving and found the patience to set us back on track. Thanks Mom. Love you.
John “the third son” Healey

Clint, thanks for sharing your Mom with me as she always made me feel like I was a very special person whenever I saw her. I hope she realized I felt she was very special too. I will always hold my memories of Mary Jane close to my heart. Peggy Newell Ganske

I have lifelong, lovely memories of my Aunt Mary Jane. Her beauty was legendary and her spirit bright. Through the years, Mary Jane often surprised me with birthday greetings. That simple, unexpected gesture touched me deeply. I loved her visits to Seattle, and mine to Iowa. Our latest in-person visit was especially memorable in that Mary Jane answered many probing questions I had about hardships she had overcome, notably with manifest grace. What a role model she was. Our final visit by phone took place shortly before she passed. Needless to say, I treasure it. I extend sincere condolences to Dana, Kurt, Clint, and countless loved ones who, like me, love her dearly and will miss her always.

Kurt and Dana,
my heart goes out to you during this time of grieving. I know how much you loved each other....

Ageless and ever green...that will be you in our memories. So grateful to have witnessed your flair for ISU tailgating, your enjoyment of Cyclone WBB, your love of Indian food, your devotion to family and numerous friends...and especially the priceless beauty of your mother/daughter relationship with Dana...

Dana, I'm so sorry for your loss. My condolences for you & your family. Stephanie (Crossmark)

MJ was beautiful both inside and out. She was warm, smart, stylish and gracious....an unforgettable lovely lady.

Dana, Kurt, and Clint,
My deepest sympathies on the loss of your dear sweet mother. During my growing years, I saw and understood the great impact she had on my brother John. He loved her dearly and always talked of her fondly.

The attached photos are added to the memorial of Mary Jane Clithero to help share their legacy.

Thank you for sharing your memory of Mary