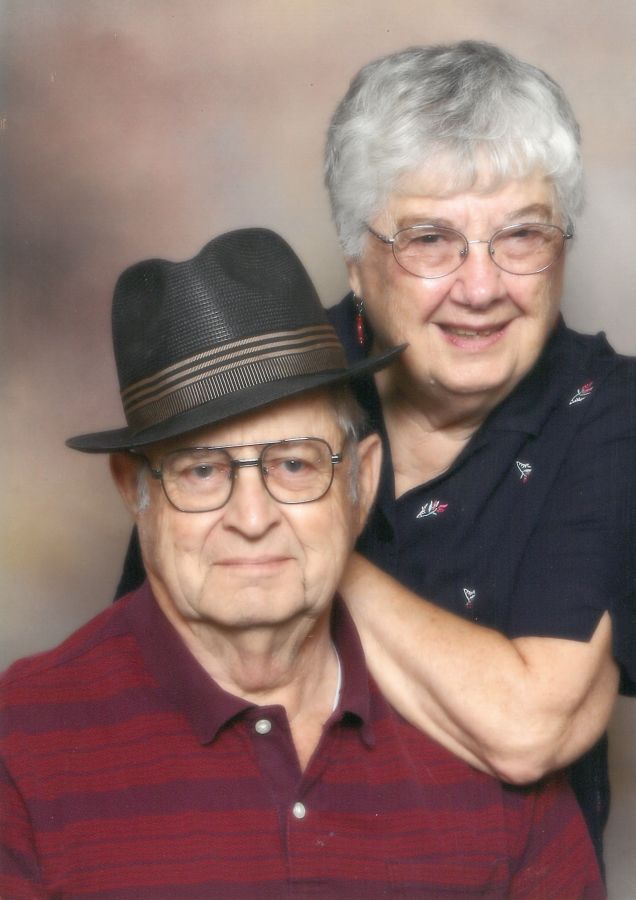 A celebration of life for Darrel and Olive Weber will be held on Saturday, June 11 from 1:00 - 3:00 PM at Grandon Funeral and Cremation Care, the Parlor, 119 Washington, in Ames.

Darrel, son of William and Elva (Horton) Weber was born in Woodward, Iowa on March 17, 1930. Olive, daughter of Marion (Pete) and May (Corrow) Nail, was born near Blairsburg, Iowa on July 30, 1932. Both growing up in rural Iowa, Darrel graduated from Woodward High School in 1947 and Olive from Blairsburg High School in 1950. They met at a Halloween party as young adults. Olive was a nursing student in Des Moines and Darrel was an engineering student at Iowa State College. They were married on March 24, 1952 in Woodward, Iowa, and were inseparable over 65 years together.

Darrel was drafted into the army during the Korean War and served his country in Babenhausen, Germany. He taught math to the Howitzer soldiers. Darrel's education was interrupted by the military but he earned his B.S. in Electrical Engineering after the service. Olive completed her nursing education at Iowa Methodist. She was employed at Mary Greeley Hospital and worked long term care at Riverside Manor in her later years. Olive and Darrel were blessed with two sons, Eric and Bruce. Darrel was first employed at Iowa Power and Light in Des Moines and then for the City of Ames as chief electrical engineer. In retirement Darrel and Olive were snowbirds for 20 years in Casa Grande, Arizona. They enjoyed the warm climate and many friendships.

In addition to his career as an engineer, Darrel loved farming and bought an acreage near Woodward close to his boyhood roots. He was very mechanically minded and repaired any and all equipment on the farm as well as teaching his boys these skills. Olive was extremely talented at sewing and handwork. She made all of her own clothes, knitted sweaters, crocheted, and framed her needlework. In later years she took up beading, especially earrings, which she wore and gave to friends.

In their twilight years, they were extremely sad when declining health kept them from their beloved Arizona. They lived a few years at Waterford in Ames until Darrel's death on December 17, 2017. A few months later it was Olive's decision to move to Shawnee, Kansas near son Bruce and her grandchildren. Olive enjoyed assisted living at Brookdale Rosehill until she needed more care in the same facility. Olive died on October 15, 2021. She and Darrel were very dear and are sorely missed. They are survived by Eric (Carol) Weber (Ames); Bruce (Kathy) Weber (Shawnee, KS); grandchildren Bill Weber (Overland Park, KS); Joe Weber (Colorado); Kevin Weber (Kansas City, KS), Clara (Tara) Blauwiekel (Shawnee, KS); great grandchildren Amanda Weber, Theo and Sam Blauwiekel. Immediate survivors of Darrel are brother Gary (Bertha) Weber of Woodward and sister Bonnie Anliker of Emmetsburg. Olive was predeceased by her sister Mary Ellen Shaw, half brothers Bill Welcher, Charlie Welcher, and half sister Nellie Welcher. Memories are cherished by many nieces and nephews in the Weber and Nail families.
Posting as Who are you posting as?

Darrel was a dedicated employee of the electric department and was respected by workers and professionals in the industry.

The attached photos are added to the memorial of Darrel & Olive Weber to help share their legacy.

Thank you for sharing your memory of Darrel & Olive