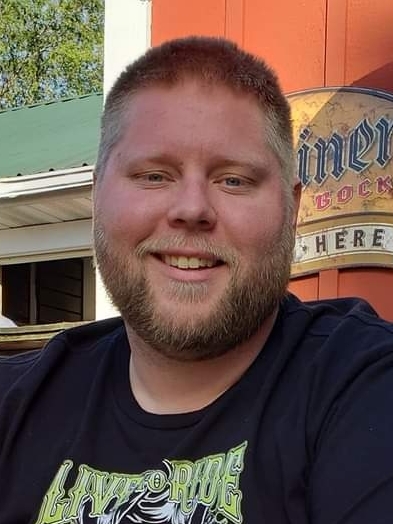 Shawn Paul Tesdall was born to Barbara Mudderman and Paul Tesdall on August 23, 1988, in Story City, Iowa. Even from a young age, Shawn could be described as an intuitive, adventurous man. His mother Barb knew he was born to be a daredevil. In his teen years while living in Las Vegas, Nevada, Shawn was involved in racing dirt bikes. He showed enough promise to be sponsored by Suzuki Motor Sports in his racing endeavors.

Upon his return to Iowa, he decided that he had enough of a formal education, and set upon his own journey. Shawn immediately put himself to work as a roofer. He would later go on to become a pest
control technician and then eventually began his career as an electrician. Early in his pest control days, he was introduced to Amie Wells through mutual friends. Together, the two made their home first in Story City, then in Ankeny and eventually, in Wisconsin for the last four years until their recent move back to Des Moines, Iowa.

Shawn was a headstrong, hardworking man who would do anything for his family, friends, and coworkers. Whether it was taking up some overtime, helping out however he could, painting the girls' toenails or working on his motorcycle with Levi; Shawn was there. Even if you didn't know him, you knew when Shawn was there. He had a commanding presence and wasn't shy about his opinion. When Shawn talked, people listened.

Shawn's best days were spent riding his motorcycle, shooting his guns at the gun range, adding to his tattoo collection or taking his family out for ice cream. He loved trying new restaurants, beers and things he'd never done. Shawn was adventurous.

In lieu of flowers, memorial donations for the family may be sent to Grandon Funeral & Cremation Care, 414 Lincoln Way, Ames, IA 50010. Online condolences may be directed to www.grandonfuneralandcremationcare.com
Posting as Who are you posting as?

The services for Shawn have not yet been added. Please sign up below to be notified when the services are ready.

The attached photos are added to the memorial of Shawn Tesdall to help share their legacy.

Please help memorize Shawn Tesdall by recording your attendance below.

Thank you for sharing your memory of Shawn