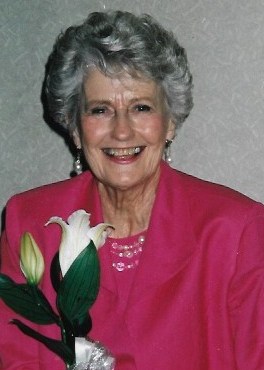 
Helen Jean Seim passed away peacefully on July 24, 2022, with family by her side. Helen was born on October 15, 1928 in Decorah, Iowa to Theodore and Rose Iverson.

She was baptized and confirmed at Big Canoe Lutheran Church of rural Decorah. She grew up on the family farm and attended country school, completing eighth grade. At 13 she moved into town, living with her older sister and graduated from Decorah High School in 1946. After graduation from high school she moved to St. Louis with her older sister, Frances, and worked in a jewelry store. Helen returned home to Decorah and met Jim Seim at a dance after he had returned from WWII. Helen and Jim were married on March 11, 1948 at Big Canoe Lutheran Church.

Helen and Jim lived in several small towns in Iowa, while Jim served in various educational teaching and administrative roles. Helen was always willing to pack up and support Jim in his career advancements. This led them eventually to Ames in 1957, where they stayed and raised their two daughters, Becky and Janet.

Helen worked for the City of Ames, but the job she enjoyed most was being an audiometrist for Area 11 Education Agency where she tested school children's hearing.

Helen and Jim moved to Clear Lake, IA after they both retired. They fulfilled a life-long dream of owning a "home on the lake" where she enjoyed and hosted many fun-filled family events. After Jim passed away in 1997, Helen wintered in Mesa, AZ enjoying her life there with many friends and activities. She loved to dance and socialize. Helen never met a stranger.

Helen was a member of Bethesda Lutheran Church and the Elks Club in Ames.

She was preceded in death by her parents, her husband, Jim, four siblings: Marguerite Rasmussen, Gail Schrader, Stanley Iverson and Frances Schwank.

The family will receive friends and relatives on August 12, 2022, from 10:30-11:30 at Grandon Funeral & Cremation Care (414 Lincoln Way, Ames Iowa, 50010) with the memorial service at 11:30. Lunch will be served afterwards. Following lunch, burial will be at the Ames Municipal Cemetery.

In lieu of flowers, memorials may be sent to William R. Bliss Cancer Center in Ames (www.blisscancercenter.org/mgmc-mcfarland), as Helen was a two-time cancer survivor, or the Josie Harper Hospice House in Omaha, Nebraska (www.hospicehouseomaha.org)

As I sit here looking at your beautiful mother and grandmother, so many wonderful memories come to mind…of my Bill, and your dad, working together all those many years…and of the fun times our families had spending all those years together, both in Ames and in Clear Lake. Will always keep those precious memories close to my heart always. Our mom and grandmother was a very special lady.

We are thinking of you all. Losing a mom or grandmother is always difficult. Our prayers are with Helen and you. Tina and Steve Pace

Becky and Janet, we lived across the street from your home on Grand Ave in the 1960s. I have fond memories of you both and your folks. Wishing you comfort and peace in this time of sadness.

We are so sorry for your loss. We knew Helen from Sun Life. Helen was a beautiful lady both on the inside and out, always had a smile and so much fun. She will be missed, may she rest on peace with our Lord. Gay Lou & W. Jay Brown

The attached photos are added to the memorial of Helen Seim to help share their legacy.

Please help memorize Helen Seim by recording your attendance below.

Thank you for sharing your memory of Helen