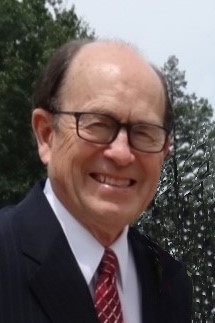 Ed, as he was known to his family and friends, lived most of his life on his family's farm in Washington County, Iowa. He loved farming, teaching his children, nephews and nieces that a farmer was far more than someone working the land. The farmer had to be business savvy, a veterinarian, a mechanic, a meteorologist...he could go on and on making that point. And he often did.
But Ed took that notion of a farmer wearing many hats to heart, pivoting away from the land in the mid-1980s, eventually embarking on a career in international business working for the Iowa Department of Economic Development. His work fostering trade between agricultural businesses in Iowa and overseas led him on travels to Brazil, Ecuador, Peru, Mexico, Ukraine and China to name just a few.

Ed graduated from West Chester High School and Iowa State University. Two extraordinary associations began during his time at Iowa State: the lifelong friendships and brotherhood of FarmHouse Fraternity, and meeting the love of his life, Gwyneth Jones. They were married July 3, 1965, and recently celebrated their 57th wedding anniversary.
Ed was deeply involved in Farm Bureau. He was the Washington County president and served several years on the Iowa board of directors. He was a veteran, serving in the U.S. Army Reserves.

Ed was a baseball coach, a lifelong Chicago Cubs fan who loved watching them play at Wrigley Field (and where he developed an uncanny ability to multiply by 35...ask his son about this), a passionate rooter for Iowa State athletics, hosting hundreds of tailgate functions prior to football games and cheering madly at those and at basketball games, eagerly walking to each one from his home near the Iowa State Center. He never missed a track meet, basketball or football game, theatrical performance or band concert of his children, Amy and Martin. If you were a fan of community theater, you would often see Ed on stage acting, singing and dancing in many musicals and plays in Washington, Iowa. One of his favorites was South Pacific.
He loved to fish, casting his lines in waterways as varied as the Skunk River, the Great Lakes and central Canada. Like all fine anglers, he fibbed remarkably well to his large circle of fishermen cronies about the fish that he caught.

If you knew Ed for any time at all, you learned quickly that he was engaging, smart, loquacious, caring, witty and stubborn...very stubborn. That quality served him well in much of his life, especially when sorting cattle, and while an admirable trait--it was less so if you were on the other end of his obstinance. Even he would stubbornly acknowledge that.
Ed was immensely proud of his family, who will cherish their countless memories and re-tell the endless stories of him, including his wife, Gwyn; children Amy (Aaron) of Seattle, Wash., and Martin (Lisa) of Kansas City, Mo.; grandchildren Andrew, Otto, Seth and Rowan; sister, Janet Ferguson of Pueblo, Colo.; sisters-in-law Miriam (Greg) Kenning of Richfield, Minn., and Nancy Jones of Cedar Rapids, Iowa; five nephews and three nieces. He was predeceased by his parents, Marion and Vera Augustine, a sister, Ruth Bainbridge, and brothers-in-law, Eldon Bainbridge and Joseph Jones.

Burial and celebration of life services pending for later this fall.

Great memories of Ed coaching baseball for us as kids and when our families would get together.
Sorry for your loss. My thoughts and prayers are with you all.

I’m so sorry for your loss - hugs to you all

Gwyn, Martin & Amy-Thinking of you all as you grieve the loss of Ed. We understand the pain & sadness your hearts are feeling at this time, and pray you will find peace knowing his pain is gone & he is "home." You are blessed to have created many family memories together that will live on in your hearts & mind.
Mom & Dad always enjoyed their friendship with Ed & Gwyn.
Sending our love,
Dedre, Nicki, Shawna & Collin Stewart

Many wonderful memories of living just a mile away from Ed and his Mom and Dad and later Ed and Gwyn. and Martin and Amy. They were and are like family. Count Gwyn’s Dad in that too. Ed will be missed. I remember how kind and supportive he always was to Larry and Me and our children Darren and DeAnna. Love, Judy Davidson

The services for Edwin have not yet been added. Please sign up below to be notified when the services are ready.

The attached photos are added to the memorial of Edwin Augustine to help share their legacy.

Please help memorize Edwin Augustine by recording your attendance below.

Thank you for sharing your memory of Edwin