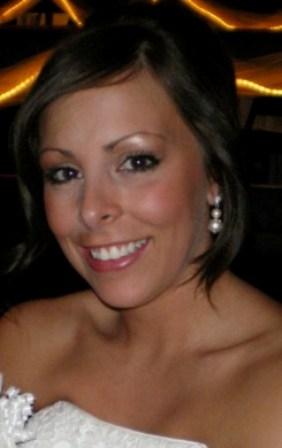 Chelsey Beth (Chittenden) Beavers, 26, a resident of Osceola, Iowa, died in her home on March 25, 2009 after a sudden illness. Chelsey was born in Carthage, Missouri on March 17, 1983 to Jim and Debbie (Shanks) Chittenden.
Chelsey grew up in Missouri in the towns of ElDorado Springs and Bolivar, attending ElDorado Springs Elementary and Middle Schools and Bolivar Senior High School until 1999 when her family moved to Ames. Her last two years of high school were attended at Ames Senior High School where she graduated in 2001.
Chelsey went on to Des Moines Area Community College where she earned a Dental Assistant degree in August 2007. She worked from graduation to the present for Dr. Sturdivant in West Des Moines. She truly enjoyed her job, her employer and being a member of Dr. Sturdivant's "Busy Bees."
Chelsey and Joe were destined to be together. After seeing Joe, Chelsey put her phone number on his truck and Joe drove all the way down the highway before seeing something flapping on the side-view mirror. He stopped, got it, called her, and true love preceded. Chelsey and Joe were married on March 22, 2008 in Ames, with many of their family and friends in attendance. They just celebrated their one-year wedding anniversary and were expecting their first child due in October.
Chelsey loved her dog Lilly and had a lifetime love of the Wizard of Oz, but most of all she loved spending time with her family and her friends, especially her nieces and nephews, and always took on the role of protector for those that she loved.
Chelsey is survived by her husband, Joe, and their beloved dog Lilly; her mother and father, Jim and Debbie Chittenden, Ames; sisters Amber Bennett (Chad), Boone; Brooke Guinn, Ames; and Draven McPeak, Ames; brother Lucas Chittenden (Sammi), Ames; her mother-in-law Kim Heath, Humeston; sisters-in-law Erin Paugh (David), Indianola; Holly Dent (Jason), Stanhope; Gloria Heath, Humeston; brothers-in-law Ben Heath, Humeston; and Andy Beavers, Iowa City; as well as many nieces and nephews.
She was preceded in death by her grandmother Madge Shanks, her father-in-law Randy Beavers, and her brother-in-law Rob Guinn.
There will be a visitation in Chelsey's honor, Sunday, March 29 from 2-4 p.m. with a memorial service to follow on Monday, March 30 at 7 p.m. at Grandon Funeral and Cremation Care located at 414 Lincoln Way, Ames, Iowa 50010, (515) 292-2273.

The attached photos are added to the memorial of Chelsey Beth Chittenden Beavers to help share their legacy.

Thank you for sharing your memory of Chelsey