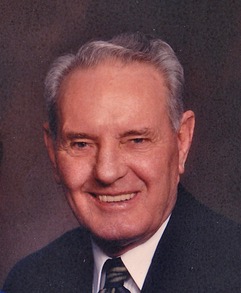 Edward Earl Hamilton age 92, of Ames, Iowa passed away on August 27, 2019 at Green Hills Health Care in Ames. The family will hold a service at a later date.
Edward Earl Hamilton was born April 12, 1927 in Newell, Iowa the son of Elmer and Dessie (Thomas) Hamilton. He graduated from Newell High School in 1944, he proudly served in the US Navy in WW II. As if by fate Luci and Eddie met when both spotted a lost dime (the same dime) outside a dance hall in Fonda. They decided to share their fortune and bought a bottle of pop (which in 1947 was 5 cents) at the Fonda café. He married Lucille Quinn in April of 1948 in Fonda, Iowa. He played semi pro baseball in Fonda and was an avid golfer, shooting his last hole in one at the age of 70. Edward and Luci farmed in Sac County area, (He attended farm school through Iowa State University). He also worked for Standard Oil as a crop manager 1968 - 1973 out of Storm Lake, during that time he became Park Commissioner for the city of Newell and he and Luci managed the golf course in Newell. He moved to Sac City in 2005 as the couple aged, they decided to move to Ames in 2015 and later into Green Hills Retirement Community. He was a member of Our Lady of Good Counsel Catholic Church in Fonda and St Cecilia Catholic Church in Ames. Honorary life member of the Knights of Columbus and American Legion.
Edward is survived by his wife of 71 years, Luci Hamilton, sons, Dennis (Lynn) Hamilton, Michael (Maggie) Hamilton, a daughter Jo Ellen Hamilton, five grandchildren, Robyn (Jeff) Goree, Chad (Sarah) Hamilton, Ashley (Ian) Smith, Amy (Matt) Fouch, Robert (Alyse) Ridpath, 10 great grandchildren, and 1 great great grandchild.
Edward was preceded in death by his parents, a brother, Donald, infant daughter, Deanna Hamilton and a son, Scott Hamilton.
Online condolences may be directed to:www.grandonfuneralandcremationcare.com

The services for Edward have not yet been added. Please sign up below to be notified when the services are ready.

The attached photos are added to the memorial of Edward Hamilton to help share their legacy.

Please help memorize Edward Hamilton by recording your attendance below.

Thank you for sharing your memory of Edward