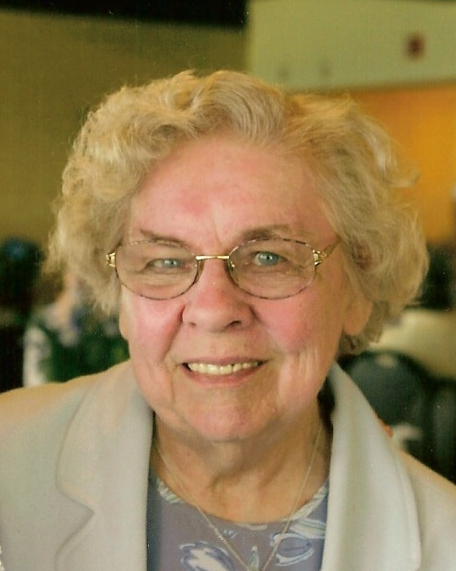 Barbara Cary Baldwin Hanway, age 96, died on September 11, 2019 in Phoenix, Arizona. She was born in Washington, Kansas, on July 24, 1923, the daughter of Frank Clifford Baldwin and Edna Lower Baldwin. She grew up in Concordia, Kansas and graduated from Concordia High School in 1941.
While attending the University of Nebraska in Lincoln, Nebraska, she met John Joseph ("Jack") Hanway in St. Mark's Episcopal Church choir. They were married on March 3, 1943. They lived in Pryor, Oklahoma and Lincoln, Nebraska before moving to Ames, Iowa in late 1949, where Jack had accepted a research position at Iowa State University. Except for two years spent in Vienna, Austria, Ames would be home for the next 60 years. In 2009, Mrs. Hanway moved to Sunquest Manor in Phoenix, Arizona.
The center of her life was her family. She was the proud mother of seven children, who all graduated from Ames High School and became college graduates. Mrs. Hanway and her husband were members of Friar's Club, where they danced many evenings with other couples at the Memorial Union at Iowa State. They held season tickets, along with a group of other couples, for the Des Moines Community Playhouse. This group continued to meet for potluck dinners for many decades. She was a member of the KR chapter of PEO and was active in the ISU Faculty Wife's Club.
She was always happiest when she could help others. For many years, she delivered Meals on Wheels to Ames residents in need. She was an active member of the St. John's by the Campus Episcopal congregation, serving in many capacities, including Sunday School teacher, altar guild member, and Daughters of the King. In 1987, she was honored with the Governor's Volunteer Award for her many service activities.
She was preceded in death by her husband, John Hanway, her son Bruce Hanway, her sisters Claudia Peterson and Jane Baldwin, and brothers Frank Baldwin, Jr. and Victor Baldwin. She is survived by her children Laurel Hanway Kimball (Bruce Kimball), Phoenix, AZ; John Hanway, Bainbridge Island, WA; Rod Hanway, Redlands, CA; Kevin Hanway (Meredith Seiser), Portland, OR; Craig Hanway (Kathy), Seattle, WA; Christopher Hanway, Aurora, CO; daughter-in-law Cheryl Wheeler Hanway, Ames, IA; sister Portia Kendall (Charles), Independence, MO; ten grandchildren; and twelve great-grandchildren.
Her funeral will be held at St. John's by the Campus Episcopal Church in Ames, Iowa, on September 28th at 1:00 PM. Memorial gifts may be made to the Iowa State University Foundation to support the John and Barbara Hanway Scholarship at ISU's Agronomy Department by calling 866-419-6768 or by mail to P.O. Box 2230, Ames, IA 50010-2230.

With sympathy to the family of Barbara Hanway. I did not know her, but she was a charter member of an organization that I belong to, P.E.O. Chapter KR in Ames. Two members of our chapter were related to Barbara. Blessings to all as the life of Barbara is celebrated on September 28 at St. John’s Bu the Campus Episcopal Church in Ames. Sincerely, Lucille Taylor

The attached photos are added to the memorial of Barbara Hanway to help share their legacy.

Please help memorize Barbara Hanway by recording your attendance below.

Thank you for sharing your memory of Barbara