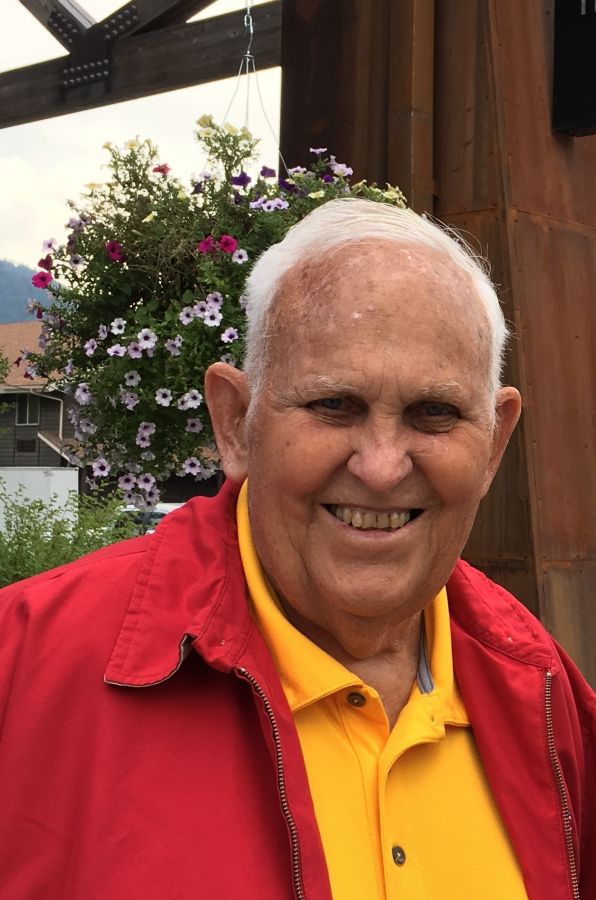 Norman Lee Den Hartog was born to John and Emma (Van Gorp) Den Hartog on February 5, 1929 in Pella, Iowa at home and moved to Knoxville in 6th grade. He was baptized at 3rd Reformed Church in Pella. As a child he loved playing outside sports and shunned indoor board games and reading. His dad had a variety store where he worked scooping candy until he ate too much of the candy and all the profits. He was subsequently demoted to wrapping gifts.

In high school Norm was an Eagle Scout and an Order of the Arrow. He attended Philmont Scout Ranch in Cimmeron, New Mexico where he was instructed to bring WWII ration stamps. He was a high school sports letter winner in football, basketball, and track.

Norm attended Central College on a football scholarship and was a starter on the Flying Dutchman football and basketball teams. He graduated in 1951 with a degree in education. Norm later received a master's degree from Drake University in Des Moines, Iowa.

Norm married his college sweetheart, Marilyn Vander Berg in 1951. The children born of this union were Susan Lynn 1957, Nancy Gay 1960 and Mark John 1964. Norm enjoyed setting up the brackets for the family Rook tournament every year. The family especially enjoyed traveling to many bowl games, Colorado and a special trip to Europe are particularly special memories. Marilyn passed away on July 30, 1998.

Norm spent seven years in the Iowa National Guard. He was a member of the Thursday Morning Men's Group at Northminster Presbyterian Church, NEA, ISEA, SLEA and Kiwanis. He was a deacon and an elder in the Lakeside Presbyterian Church. Norm also scooped walks, repainted the railings, trimmed the bushes at Lakeside, and kept the keys in case the pastor got snowed in. Norm built or remodeled more than forty homes.

Norm married Harriet Seagren in 2001. They enjoyed traveling to several European countries, China, Israel, and Africa. They wintered in Mesa, Arizona for 15 years where Norm enjoyed the woodworking shop, working with stained glass, and remodeling houses.

Norm was known as a polite gentleman who was always interested in his friends' families. He especially enjoyed making many craft items for his friends and his son's patients. He loved chasing a golf ball and played in several bridge clubs. His two favorite sports teams were the Storm Lake Tornadoes and the Iowa State Cyclones. He enjoyed watching college football and basketball games on TV every weekend.

Norm was preceded in death by his parents and his first wife, Marilyn.

3 people have supported the family by purchasing them flowers or gifts from the Healing Registry.

My dad Walt Schulz just shared this news on FB and wrote, “He was such a friendly and level headed person. Always looked forward to being in his company.” I knew him as Mr. Den Hartog. He was my shop teacher. Not only was I a terrible woodworker, but it also took my entire tenure in middle school to learn how to spell shop (not shoppe!). He took it all in stride, was the most patient and gentle and easy going teacher. I loved being in his class. Only fondness for him. I’m sorry not to know he wintered in Mesa or I would have looked him up when visiting my dad. My condolences to your family. Jenny Schulz

Nancy Ashley and Amy and Familes
So sorry to read of your Father and Grandfathers passing.Our prayer are with you at this time.
Sorry we will not be able to attend either service as we will be out of town But know we will be
thinking of you.
Jane and Bill

Nancy, Ashley and Amy and Families
So sorry to hear of your fathers , Grandfathers death. It has been a very trying month for you families.
our prayers will be with you. Sorry we will not be able to attend either service, we are going to be out
of town. Know we will be thinking of you.
Jane and Bill

I have many fond memories of "Coach" . I was lucky enough to have been Mark's friend. I got to tag along to many basketball games, football games and swim meets. Coach and Mrs Den Hartog were always such warm loving people.
I remember the day my Dad died, Coach came and found me and made sure I was OK and offered to do anything I needed. That small gesture meant a lot.
I'm disappointed that I didn't know he wintered in Mesa, I definitely would have paid him a visit. Please accept my sincere sympathy for this great loss.

He was always just " coach " to our family. Can't think of a nicer man, what a pleasure to be around ! He once was our neighbor but always a dear friend to the entire Storm Lake Thompson's . He will be missed ! Mike and Rae Thompson

I only have positive memories of Norm. He was always so upbeat and friendly. A very classy person. He meant an awful lot to the whole Thompson family!!! From early childhood next-door-neighbor memories to-golfing-with-my-dad-in-retirement memories, he was the best!!! He positively impacted a lot of people, He will be greatly missed.

Harriet and family,
I am so sorry to hear about Norm. He was always so nice when in HyVee. Always had a quick smile and kind word. My thoughts are with you and your family. May your memories give you peace and comfort.

My condolences, sympathy, & prayer during these days. Norm was a good neighbor at the condos on West Lakeshore Avenue. Blessings to him & to you, Harriett.

Coach Den Hartog was my high school PE and track coach in Storm Lake. He was a very kind man and treated everyone fairly. He made a real effort to teach us a variety of games and activities in PE.

RIP Norm, you will always be Coach.

Coach was a very nice man, I have many memories of him. Everyone loved him may he rest in peace now.

Norm was my first landlord. He was quick to repair anything. He and Mark would have me scooped out at the crack of dawn in the winter. Always enjoyed running into him and having a friendly catch up until he moved. I have aways thought of him as a very dear man.

I am sorry for your loss. Norm was a great man and mentor. I will always remember at the end of the first semester Norm and Marilyn had all the middle school teachers over for a Christmas party after the last day of school. The house on Lake Ave. looked like a Hallmark Card. The giant bowl of egg nog was the best ever! I still miss that gathering of teachers at a home that put everyone in the Christmas spirit. It was a privilege to have taught with, learned from, and to have known this great man.

Sympathy and prayers to the family. I had him as a high school coach. He was a wonderful man

Forever known as 'Coach", Norm was a great guy. We loved PE class in elementary school and Jr. high because Coach was a great teacher!!!

I enjoyed the summers during the 4th July. He was so proud of the family getting together to design and build cardboard boats for the races on the lake. Always unique and creative. A class act.

My sympathy to the family! Had Norm for a coach in high school and he was the girls first basketball coach in Storm Lake. Great times with him and his family.
Connie Swenson Demers

We, in Storm Lake, were fortunate to have him as a coach. He was a wonderful man and father. Please accept my condolences. Jane Toay Weakley

Harriet, what a small world! I did not know that you had married Norm. Small world. Central College is where I taught for 19 years before retirement. My sympathies dear lady.
Dr. Esther

The attached photos are added to the memorial of Norman Lee Den Hartog to help share their legacy.

Thank you for sharing your memory of Norman