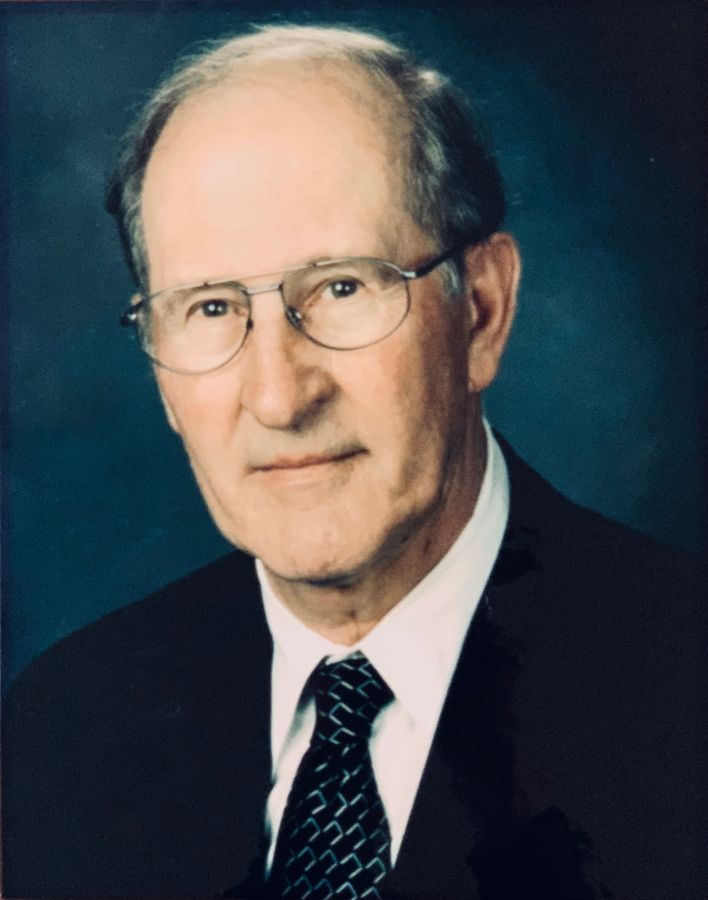 Albert Eugene "Gene" Freeman, 89, of Ames, passed away on March 21, 2020 at Green Hills Community, with his family by his side.
Gene was born on March 16, 1931 in Lewisburg, West Virginia, the youngest of four children born to James and Grace (Neal) Freeman. Growing up on the family's small dairy farm, Gene was active in 4-H, showing and judging dairy cattle, and he learned to hunt at an early age.

On December 23, 1950, Gene married the love of his life, Christine Lewis, in Lewisburg, West Virginia.
Gene obtained a B.S. in Dairy Husbandry in 1952 and a M.S. in Animal Breeding in 1954 from West Virginia University and went on to obtain his Ph.D. in Animal Breeding at Cornell University in 1957. After accepting a position in the Animal Science Department at Iowa State University, he and Christine moved to Ames.
Gene spent his entire career at Iowa State where he taught and mentored over fifty graduate students and conducted research in dairy cattle breeding and application of genetic principles to dairy herd nutrition and management. At Iowa State, he was named a Charles F. Curtiss Distinguished Professor of Agriculture and Professor Emeritus for the Department of Animal Science. Gene had the ability to communicate with any audience, whether it was a farm family or a collection of international scientists, and he had the ability to recognize practical problems faced by dairy farmers and apply scientific principles to solve such problems. Throughout his prolific career, he published more than 200 scientific journal articles and traveled, lectured and consulted in more than thirty states and twenty countries. Gene received numerous academic and industry honors and awards, including being an inaugural member of the West Virginia University's Academy of Distinguished Alumni, the Borden Foundation Award for outstanding research in Dairy Science, and the National Dairy Shrine Guest of Honor. In 1975, following the grant of a Senior Fulbright-Hays Award, Gene served as a Visiting Professor at the University of Wageningen, Netherlands and the whole family accompanied him on this adventure. In addition, he was active and held leadership positions in multiple professional associations, including the American Dairy Science Association.
Gene was an active member of Collegiate Presbyterian Church, where he taught Sunday school and served as an elder, deacon and trustee. His hobbies included hunting, woodworking, and golfing and he enjoyed playing bridge and penny poker with his friends.

Gene was a caring and devoted husband, father, grandfather, and great-grandfather. He led by example, treating everyone he met with kindness and respect and he kept us all laughing with his antics. Left to cherish Gene's memory are his loving wife Christine, daughters: Patricia (Russell) Works of Lexington, KY; Lynn (Paul) Hempe of Eden Prairie, MN; and Ann (Todd) Irvine of Eden Prairie, MN; five grandchildren, two step grandchildren, one great-grandchild, and four step great-grandchildren.
Gene was preceded in death by his parents and his siblings, James Freeman, Vivian Lightner, and Lucy Greene.

A memorial service will be held at a later date with a burial to follow at Ames Municipal Cemetery. Memorial contributions may be made to the Iowa State University Foundation to support the Dr. Gene Freeman Graduate Student Travel Fund in Animal Breeding and Genetics, 2505 University Boulevard, Ames, IA 50010. Online contributions may be made by visiting http://foundation.iastate.edu/makeagift and designating fund #2705044.

Online Condolence may be directed to: www.grandonfuneralandcremationcare.com/

What a wonderful neighbor & friend Gene was - I grew up across the street from him and Chris, played and went to school with his daughters... and when my Dad died at an early age from cancer, the Freemans were a constant source of suppot for my Mom (and me) I was sorry to hear of his passing, he was very special to me, words I always wanted to tell him in person... Ahh I guess this will have to do for now. Sincerely, Mark Swenson (from the old neighborhood)

We were so sorry to read of Gene's death. Hopefully we can attend his future memorial service. We will keep all of you in our thoughts and prayers.
Emmett and Mary Stevermer

The attached photos are added to the memorial of Gene Freeman to help share their legacy.

Please help memorize Gene Freeman by recording your attendance below.

Thank you for sharing your memory of Albert