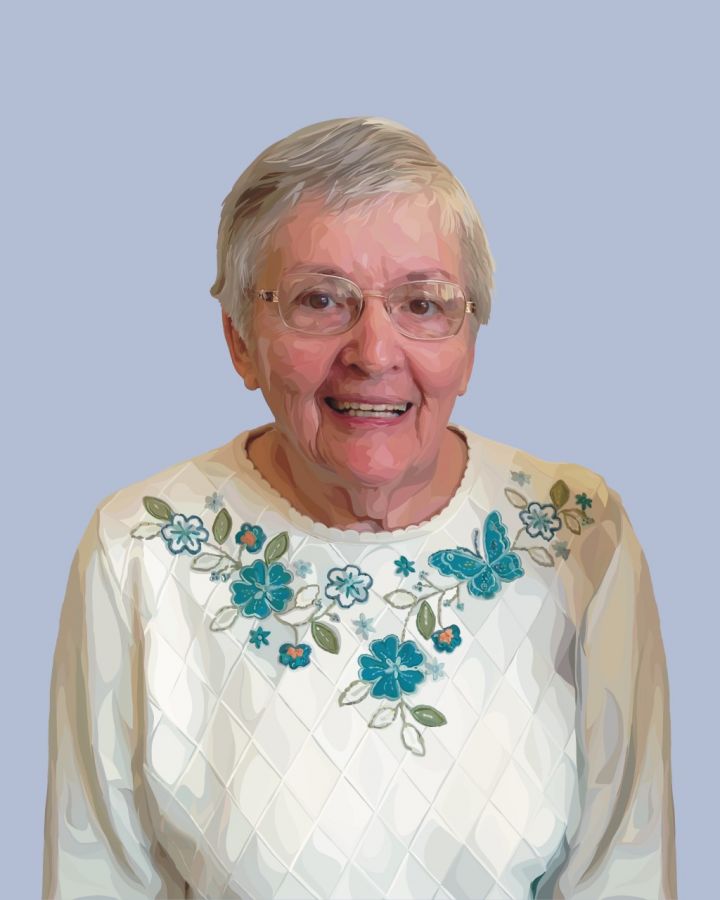 Elizabeth "Betty" Wright, of Ames, passed away on January 27, 2021, at Heartwood House. Due to the Covid-19 situation, a memorial service will be scheduled at a later date.

Betty was born on April 23, 1932, to Charles E. and Alice Libby Johnson in Newton, Massachusetts. Before she entered high school, she and her family moved to Portland, Maine. Betty graduated from Deering High School in Portland in 1950. She worked for an insurance company and the Episcopal Diocese of Maine. In 1951, Betty met a young Airman Herbert Wright from Michigan as he stationed at Fort Williams at Cape Elizabeth, Maine during the Korean Conflict. Following a courtship that took place through the mail as Herb was stationed in different places and returned to Michigan to start college again, Herb and Betty were married at Woodsford Congregational Church in Portland, ME on August 28, 1954. Herb completed his BS and MS at Michigan State University while Betty worked for the University. Daughter Ann and son John were born in Lansing, Michigan before the family moved to Ames, Iowa. At the time, the families wondered aloud about the unknown world of Iowa.

After the kids were in school, Betty went to college at Iowa State University and became active in a new organization for Adult Students on campus. She was named Outstanding Adult Student in 1975. She graduated with BA in Journalism and Mass Communication in 1975. She did graduate work in ESL.

Betty was an active member of the Ames community over the years. She was active at both Northminster Presbyterian Church and later at Collegiate Presbyterian Church. Betty served as an Elder, Christian Education recruiter, and many committees at Northminster. Betty served on the Rummage Committee at Collegiate for many years. Betty was active with the Friends of Foreign Wives, including tutoring women in English. She was a part of Beyond Welfare and served on the Bicycle Committee as they advised the City Council. She was a Hospice volunteer. She was active member of Iowa State University Women's Club.

After she and Herb retired, they spent winters in Florida and then in Texas. In the summers, they enjoyed their favorite place in the world, Wilderness State Park, just outside of Mackinaw City, Michigan. In addition to these times on the road, Betty's greatest joy was spending time with her family.

After Betty was diagnosed with Parkinson's Disease, she participated in research projects with the Kinesiology Department at Iowa State. She enjoyed ballroom dancing, singing, and boxing as a research participant.

She is preceded in death by her parents, her stepmother, Lucille Johnson, and two sisters, Cynthia Ward and Alice Park.

The family requests no flowers. Memorials be directed to the Iowa State Foundation to Parkinson's Disease Research for Kinesiology at Iowa State University www.kin.hs.iastate.edu

My husband Doug, was a participant in the ISU Parkinson's groups and a member of the Ames Gang. Doug passed away in May from cancer. I have heard wonderful things about Betty's life and know you have many happy memories with Betty. My sympathy is with her whole family.

I had the honor of taking care of Betty at Heartwood House. Her positive attitude, smile, correcting of grammar, and so much more will be dearly missed. She was such a sweet lady and I am thankful to have known her the past few years of her life. My thoughts and prayers go out to her family in this hard time.

In addition to all the good works and volunteering listed in the obituary, Betty was also the Welcome Wagon lady in the Parkinson's Outreach programs. She was the first participant to welcome my husband, Paul, to the group which led him to a long enjoyable relationship with The Ames Gang.
We will always miss Betty, but her spirit is still powering the group on, and her signature laugh is still echoing off the walls in our meetings

Our ISU Women's Club Genealogy Division enjoyed hearing Betty share stories of her early years growing up. She was such a delightful person. She will be missed.
With sympathy to all her family. Mary Stevermer

What a wonderful life with so much love and compassion for others. This gift has certainly been shared with her children as I have seen this in John time and again. A life to celebrate with the promise of tomorrow. Prayers for the entire family. Teresa M.

Betty's son is a co-worker of mine and one of those people that everyone knows to be both good and genuine. I believe those qualities don't happen by chance and know Betty blessed us all through her children. I extend my condolences to the family on their loss, and my thanks to Betty for the blessings she fostered for so many.

The services for Elizabeth "Betty" have not yet been added. Please sign up below to be notified when the services are ready.

The attached photos are added to the memorial of Elizabeth "Betty" Ann Wright to help share their legacy.

Thank you for sharing your memory of Elizabeth "Betty"