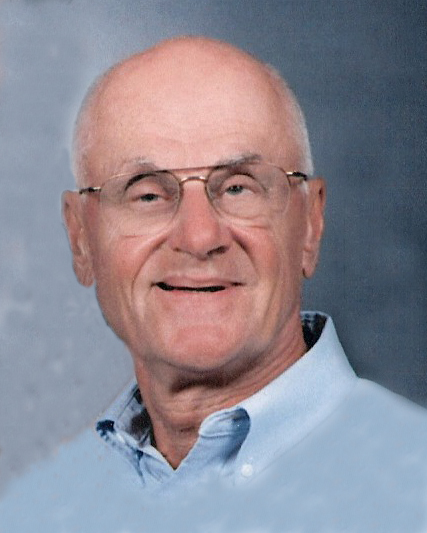 Bill was born on July 31, 1934 in Chicago, Illinois to parents Oscar William Lundquist and Ann Marie Paradies. He was an only child and was loved and spoiled immensely by his mother. When he was two years old the family relocated to Marion, Iowa. While in high school, Bill was active in all school activities. He was a star basketball player - it helped that he was 6'4. He was on the golf team and continued to play golf his entire life carrying a one under par handicap. Bill was also in the high school Glee Club, mixed choir, vocal groups and he was in the junior class play. Being on the honor roll all four years was certainly just the start of his academic achievements throughout his life. He was chosen to be a member of the high school academic travel team. His team was a finalist in one competition and they were on TV. Too bad video cameras, DVD's and cell phones were not invented back then. Maybe that is a reason why Bill was such a fan or Jeopardy and Wheel of Fortune. Bill's nickname in high school was ironically "Chince" which is a very fitting name for Bill as he wasn't exactly chintzy, but he was very frugal throughout his life. For those that knew him, Bill was a very intelligent man.

Bill graduated from the University of Iowa with a degree in Structural Engineering in 1957. It was there that he met his wife Sandra Hartman ("Sandy"), at a dance hosted by Bills fraternity Phi Kappa Sigma. It was love at first sight and they married on July 6, 1957 in Sandy's hometown of Burlington, Iowa. Bill was in the Army ROTC at the University and after graduation he and Sandy moved to Junction City, Kansas to serve his 2 years as a Civil Engineer. He was busy during this time; but not busy enough to happily have their first born, Wendy. After serving in the Army from 1957 to 1959 he accepted a job at the Iowa Department of Transportation in Ames. Bill worked there for the next 40 years, eventually retiring as the Chief Bridge Engineer.

Bill was a great family man and a loving father and husband. He was very involved with his three children and spent many nights helping them with their homework. It confused them at times when he would pull out his "slide ruler" when helping with Algebra. He also spent a lot of time with them outdoors teaching them the important things in life like golf and basketball and football and of course tether ball or HORSE. When the family moved to their new home in Ames on Eisenhower, Bill built a racetrack in the backyard where Wendy, Brad and Jill, along with their friends, had endless amounts of fun!

Bill and Sandy loved to travel and visited many beautiful places around the world. The Alaskan cruise that they took with their entire family for their 50th wedding anniversary was Bill's favorite. The portrait that one of his granddaughters painted was hung by his chair so that he could relive those memories every day.

Bill was a very religious man and very active at St. Paul Lutheran church, the family's church for over 60 years. He was in the choir, served as an usher and as an elder and was on several committees.
Bill loved golf. Bill and Sandy were members of the Ames Country Club and played in the couple's league. Bill also played in the men's league and won many tournaments along with scoring multiple "hole-in-ones". Ironically as newlyweds Sandy did not even know what a hole-in-one was but eventually golf became one of the many activities they enjoyed together. On most sunny afternoons you would find them on the course enjoying a game of golf.

Bill developed spastic paraparesis in early 2000 and eventually had to give up playing golf. But he and Sandy spent every Thursday through Sunday watching this game that Bill loved so much on TV. He also could not be as active at the church, but he never missed a televised sermon and continued with his strong faith and relationship with God. It is through his faith that he was able to remain positive while suffering from this debilitating disease.

Bill is survived by his wife, Sandy, their children, Wendy Daehling and her husband Russ of Staplehurst, Nebraska and their children, Rachel, Kevin and Chip and their families; Brad Lundquist and his wife Patty of Des Moines, Iowa and his children Matt and Bryan and their families; Jill Orton and her husband Bill of Centennial, Colorado and their children Alexandra, Lauren and Will. He is also survived by his 13 great-grandchildren, and another great-granddaughter to arrive in the next few weeks. He is preceded in death by his parents and several beloved aunts, uncles, and cousins.

A memorial service to honor Bill will be held at a later date at St. Paul Lutheran Church. A notice of the date and time will be sent. All are welcome to attend and celebrate Bill's life. It was a fantastic one. He will be missed.

They certainly broke "the mold" after creating Bill! What a character! I enjoyed working with him as he tweaked, cursed and then restarted his precious iPad!! I am sorry for his loss and look forward to teaching Sandy how to play mahjong!! He surely loved his family!!

Bill was a wonderful man of faith. He always had the most intriguing questions at our seniors Bible study, and his questions led us to think more deeply about God's Word as we applied it to our lives. Bill also had a great sense of wit and would sprinkle our discussion with a joke or funny remark, shared with a smile on his face and a sparkle in his eye. I know you will miss Bill deeply and you are grieving greatly from his sudden departure. I am praying to the Lord to give you comfort and to strengthen your faith as you await the day you will see Bill again in heaven.
Pastor Jenks

To the family of Bill Lundquist: I never met Bill, but am good friends with his sister-in-law Judith Hartman-Lehmann. She had nothing but good things to say about him & his family. Prayers that you all have God’s Peace as you rejoice for his presence before Jesus & mourn his physical absence from your lives.

To the family of Bill Lundquist
I was a design technician in Bill's squad and always appreciated the challenges and opportunities he gave me when I worked for him. He was a real “leader” and I was proud of the amount of work that was generated in his unit. I especially remember him challenging me at times and making me think. I might ask him for a solution to a problem and he might say “ A chain is only as strong as its weakest link” and let me figure out the solution. Bill designed some neat projects across Iowa and I was blessed to transfer some of his designs to final construction plans using vellum, ink and drafting instruments, way back in the day before computers, and yes, I was also one of the slide rule users. I remember the day when Bill retired and I was thinking he was probably one of the best Engineers I worked with and who do I go to now when I need an answer to a question.
Sandy, I understand your loss as I lost my Darlyne just a year ago to cancer. We were blessed with 53 years together so I can relate to some of the emotions you are probably going through right now. I pray for peace for you, and all your family members.
Doug Warrings
Eureka Springs, AR

The services for William "Bill" have not yet been added. Please sign up below to be notified when the services are ready.

The attached photos are added to the memorial of William "Bill" Lundquist to help share their legacy.

Thank you for sharing your memory of William "Bill"