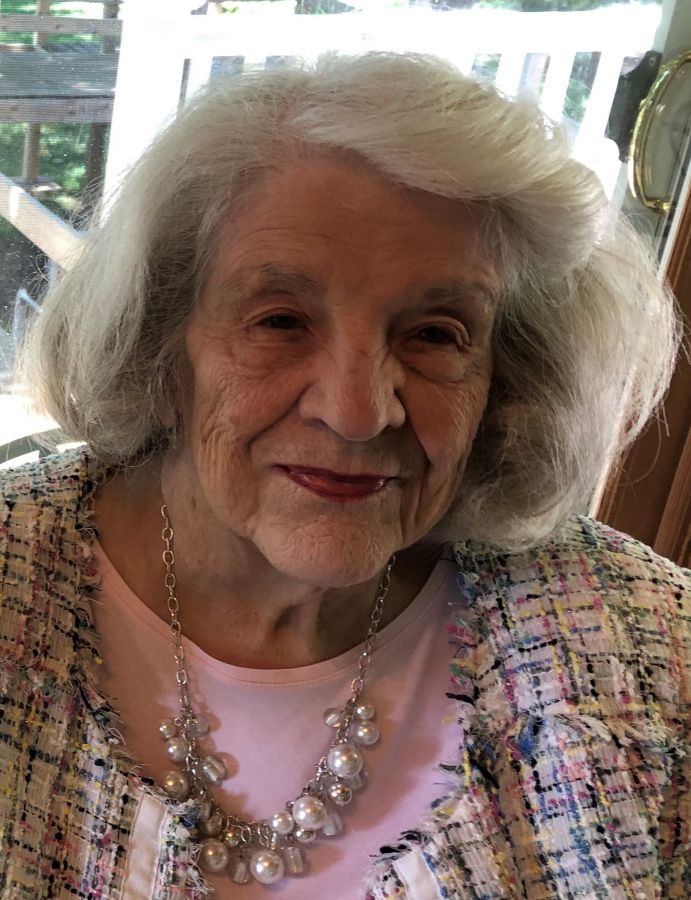 
Margaret Terry Schlunz, daughter of Charles Cooney Davis and Bernice McCaslin, was born on February 14, 1927, in Princeton, Kentucky. She was an only child and lived with a loving extended family. During high school she loved working at her grandfather's shoe store, cheerleading, music, movies, dances, and going to the lake.

Terry graduated from Christian College in Columbia, Missouri in 1947. She met and married Fred Schlunz on December 30, 1947. They moved to Ottumwa, Iowa to live with and take care of his ailing mother. They moved to Paris, Arkansas and spent summers in Laramie, Wyoming. There they gained life-long friends and a love for the Snowy Range Mountains.

Their first child (Suzanne) was born while in Oskaloosa, Iowa. The final move (1954) was to Iowa State University in Ames. Terry became an avid I.S.U. fan, going to all the games and music/theatre events until recently. She especially loved the I.S.U. Christmas Music program at C.Y. Stephens.

Children Kathy, Jim and Bob were born in Ames. The environment that she created for her children was almost magical. She made every holiday special and let them play in the dirt!

Terry made great friends, was a member of Collegiate Methodist Church, Questers, ISU Faculty wives, and bridge clubs. She loved going "antiquing". She began collecting miniatures and created tiny, intricate scenes that won awards, including a blue ribbon at the Iowa State Fair. The interest turned into a business of selling miniatures. She traveled to shows all over the country, making friends wherever she went.

Terry was elegant. She loved flower gardening and made the most beautiful bouquets. She set a most exquisite table, making anyone who ever sat at one feel like royalty!

Terry lived life to the fullest. She was happy. She was graceful and gracious. She was smart and inquisitive. She was fun and funny. She was warm and loving. She was talented and creative.

Terry was preceded in death by her parents Charles and Bernice, husband Fred and daughter Suzanne.

Memorials may be directed to Friends of Music, I.S.U. Department of Music and Theatre, 149 Simon Estes Music Hall, 2427 Union Dr., Ames, IA, 50011 to help with music scholarships. What a great joy these I.S.U. students have been to Terry and her family!

I've known Terry my entire life, as neighbor-mother on Roosevelt, as a great friend to my mother for 60 years, and always as a sparkle of vigor and joy on any occasion. She will be missed far beyond her family.

She was just on my mind the other day after I thought about her and wondered about her joy she had to be enjoying w the success of all of the ISU teams recently.
I shared her obit on Facebook and found myself going on and on ♥️ It’s hard to understand the feeling of tears in my eyes, smiles on my face, and ache in my heart as I think about her passing.
My thoughts are certainly w you all, thank you for sharing her.
Ushering her and Fred at bb games and delivering their mail several years added so much joy to my life, please take care and know you will all be in my thoughts as you navigate through this sorrowful time. I was honored to know her (and Fred even being a St Louis fan 👎😉)
Take care and may your memories be treasured forever

Terry was the nicest person anyone could meet. It was a pleasure to have known her and Fred.
Tom Pace

The attached photos are added to the memorial of Margaret Terry Schlunz to help share their legacy.

Thank you for sharing your memory of Margaret