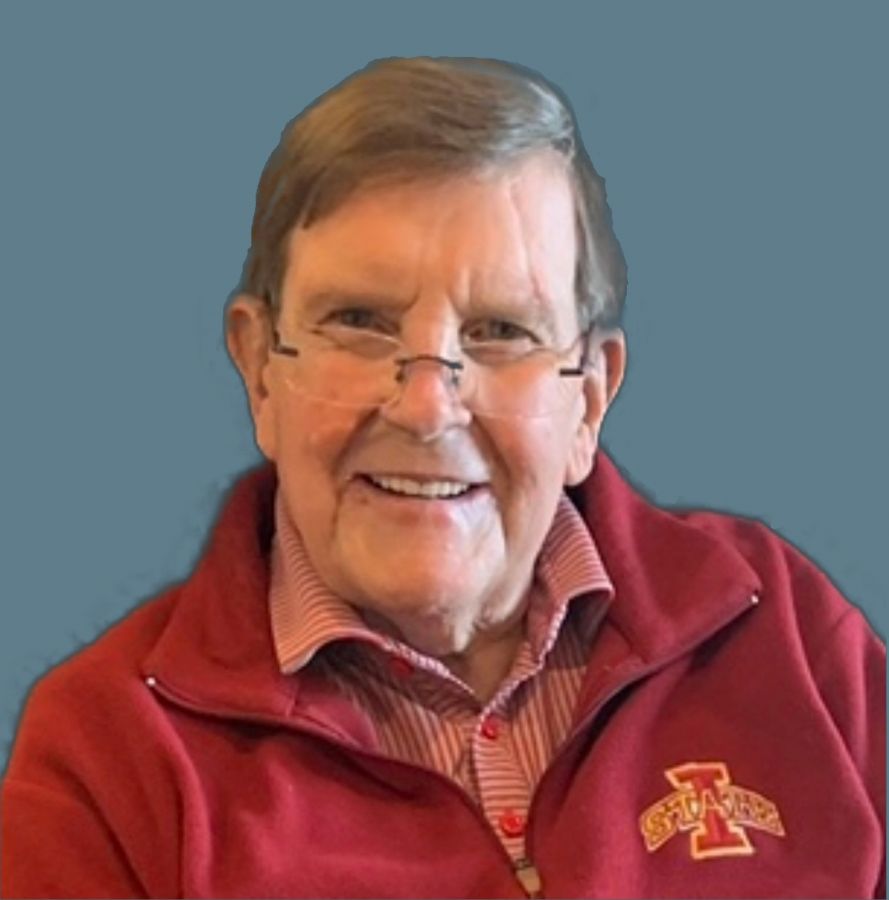 AMES - Dennis G. Olson, passed away on May 30, 2022, at Israel Family Hospice House surrounded by his loving family. A private service is planned for a later date.

Dennis earned his PhD in Animal Science from Iowa State University in 1975 after growing up on a farm in rural Thor, IA and marrying Jane Olson in 1968. His father was a Norwegian farmer and his mother was the most Godly, sweet woman anyone could meet. He learned a lot from the two of them as well as his siblings, Mary, John and Marcia, growing up on a farm that will be in our family for 150 years this August.

Shortly after his graduation from ISU, he entered the National Guard, serving in Boone, Oklahoma and Kentucky. Upon release, he and mom moved to Chicago for work and, a few years later, he was offered a job in Lincoln where he became a professor at the University of Nebraska-Lincoln. They loved their time at UNL but, when ISU came calling in the summer of 1980, he couldn't refuse their offer as it was the opportunity to go home. Besides a 5-year stint in Omaha from 2000-2005, Ames/ISU is where they spent their life together. It is/was truly mom and dad's home and it makes sense why; they were engaged at Brookside Park and happily married for 53 years. They loved each other dearly and had fun whatever they were doing and with whoever they were spending time.

To his son, Jon, he was daddy, pop, dad or Papa. He introduced Jon to golf, baseball, soccer, football, basketball and music while helping coach teams he played on. He loved his grandchildren, Parker and Edison, an immeasurable amount. They called him TuBubba. Odds are he was the only grandfather in the world with that title and he wore it with great pride. To the kids, TuBubba meant fun, love, the lake, excitement and unexpected experiences. To his wife and his extended family, he was known simply as D, Denny or Dennis.

His mind was amazing. Not many people thought like he did. He saw things differently than others. Sometimes it was agonizingly frustrating trying to figure out his reasons and his whys but, when you'd realize where he was going with them, you'd sit back and marvel because his logic was so much better than what the common person would've come up with.

He raised tens of millions of dollars for Iowa State through grant research. He once spoke before a congressional hearing on food safety upon Capitol Hill. He traveled the world seeing so many countries that he lost count but he figured it was around 25-30; many of those countries he saw multiple times. His work took him to 6 continents. He helped develop food technology where society wouldn't have to worry about E-Coli, botulism, salmonella and other food borne pathogens that can harm or kill people. It was a great concept that came close to succeeding but, as with most good ideals, politics, policy and money just didn't allow for it. He worked on a project for NASA, helping develop food for extended time in space and for space travel to Mars. He could fix anything. He did stuff like that. He made the world a better place.

He taught how to love family and he allowed family to love him. Not all people do such things but he did.

He was a husband, a father, a grandfather, a son, a brother, an uncle, a great uncle, a friend, a high school state champion in track, a farmer, a scientist, a teacher and so so so much more.

In death, the greatest thing someone can do is make you miss them. He'll always do that for us and we'll eternally be grateful for it.

Memorials may be made to the family for a scholarship yet to be established.

Dennis was a great ISU meat science staff member. I worked with Dennis as a graduate student and then later as a fellow faculty member in the animal science department. He was always easy to work with, had a great sense of humor, and had good research ideas with regard to research on most any topic. He would always listen and give you well thought out advice.
He was also a good Cyclone enthusiast. We used to sit fairly close to him and would talk to him a half time....maybe if he had been the coach, we would have won more games! He would have made the players enthusiastic.
RIP, Dennis, it was a great honor to work with at ISU and to have you as a friend.

I was a non-traditional student returning to school after 6 years in industry for my MS & Ph.D. in Food Technology with Allen Kraft but Denny was always on my committee and was as much as an advisor as a friend (he was only 5 years older). He has a wonderful zest for life and I have many memories of him. I share your sorrow and I like the photo that I am looking at with that smile on his face.

Myself and Gina send our sympathies to Jane and family on the passing of Denny. He was my mentor and boss for over 20 years. He was caring and always wanted the best for his students, staff and colleagues. I will always remember his sincerity and up beat personality. Rest in peace Denny.

Greg and I extend our condolences to Jane, Jon and the whole family. I remember Denny's many contributions to the department and ISU, and through those to the whole meat industry. On a personal level, he was very supportive of me as a new faculty member, which I greatly appreciated. I'll never forget the fun of being on the Food Tech bowling team with him -- our team scores were not very high, but we all had a great time together!

We are so sorry to hear of Dennis' passing. He was such a fun fellow. We will keep all of the Olson family in our prayers. With sympathy, Emmett and Mary Stevermer

I’m very sorry to hear of Dennis’ passing, and I offer my sympathies to Jane and the entire Olson family. Dennis was a great contributor to society and was a brilliant scientist. He and I were FarmHouse fraternity brothers, and I have always considered him a close friend. He will be missed by everyone.
Don Wilson

Denny joined the faculty the same year I did. He was easy to work with and always supportive of new ideas. For years we saw him and Jane at ISU basketball games. He had an infectious smile and he will be missed. May his memory be a blessing.

When people asked me who my major professor was at Iowa State, I was proud to tell them, “Dr Olson.” He guided so many of us through graduate school — found funding for our projects, gave thoughtful insight on experimental design, deftly directed us to the right statistics and, with his mischievous smile and quick laugh, made sure we didn’t take any of it too seriously. Much love and appreciation for Dr O, it’s so sad to see him go. All our best and kindest thoughts to Jane, Jon, and family. Much love, Bob and Wendy Hanson

Denny will be missed by many for his achievements and more so the friendship he provided to all who had the opportunity to spend time with him. Our thoughts and prayers are with you Jane and the extended family. From a fellow FH classmate. Ron and Lynn.

The services for Dennis have not yet been added. Please sign up below to be notified when the services are ready.

The attached photos are added to the memorial of Dennis Olson to help share their legacy.

Please help memorize Dennis Olson by recording your attendance below.

Thank you for sharing your memory of Dennis