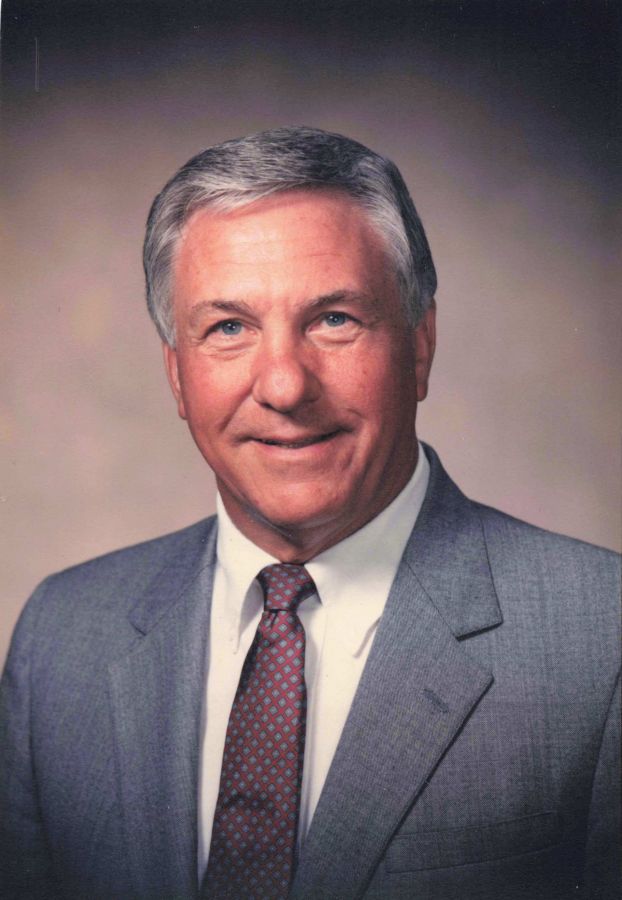 Norman Herbert Rudi was born in the Lutheran Parsonage in Glidden, Iowa, the eleventh and youngest child of Rev. Frederich H. A. Rudi and Emma (Wassman) Rudi, on July 22, 1928. He attended Glidden Consolidated Schools where he participated in football, basketball, baseball, music and drama. He was State Honorable Mention in football and basketball for two years.

He attended Iowa State College for one year, and when he turned eighteen enlisted in the U.S. Army as a paratrooper, serving in M Company, 187th Para-Glider Regiment, 11th Airborne Division, spending nineteen months in the Army of Occupation in Japan, near Sapporo, Hokkaido.

He was honorably discharged in August of 1948 and entered the University of Iowa College of Engineering. While there he earned a numeral in football.
After one year, Norman transferred to the University of Oklahoma to study under noted architect Bruce Goff, receiving his Bachelor of Architecture of the AIA, and also served as associate editor of the Engineering Magazine for several years.

After graduation Norman worked for Paulson Construction in West Branch, Iowa as a construction superintendent and architectural designer for two years. He then moved to Cedar Rapids to work for Brown and Healey Architects for three years and Crites-McConnell Architects for three years, participating in a number of award-winning projects. While living in Cedar Rapids, he designed sets for the Cedar Rapids Community Theater and served the Art Association Board.

1954, Norman met Ann Andrews of Iowa City, a student at the University of Iowa and they married in December 1955.

In 1961, Norman joined the architecture faculty at Iowa State University and was given the responsibility of organizing the Sophomore Design Sequence. Five years later he formed an architectural firm in Ames with partner Charles DeKovic. As an Assistant Professor, he continued to teach part time until 1974 when he formed Architects Rudi Lee Dreyer with William D. Lee and William Dreyer.

Norman also rode his bicycle on RAGBRAI nine times form years 10 through 18. He was a ten-gallon blood donor and also an organ donor.

Norman was appointed to the Iowa Architectural Examination Board by Governor Terry Branstad, serving nine years. Elected Chair of Region Four (nine states) of the National Council of Architectural Registration Boards (NCARB), he later served three years on the national NCARB board of directors. During that time he played leadership roles in developing national Continuing Education for Architects, the Intern Development Program, and correlating Computer Examination for Architects. He also participated in three accreditation visits of architectural schools.

For all of his activities, Norman Rudi probably received the most notoriety in 1976 when after a Cyclone football victory over Northern Illinois, at 9:30 PM Saturday night, painted "BEAT OKLAHOMA- The sooner the better" with a paint roller in eight-foot-high letters on Lincoln Way north of Hilton Coliseum, to fire up the team for their next game. His accomplice, the General Manager of the local radio station, spread their activity nationwide within an hour. It produced a great effort by the team, but no victory.

Norman retired from Rudi Lee Dreyer in 1994 and continued to practice under Norman Rudi Architect for several years working on projects in western Iowa.
In 1999 he interviewed a friend who served in WWII who had an amazing military experience and wrote "An Iowa Pilot Named Hap." While making a presentation on Hap's book he recognized six WWII veterans in the audience who lived within two blocks of his home, all who served in the Air Corps. Adding three more veterans only two more blocks away, he interviewed them and wrote, "A Neighborhood of Eagles." Six months later, he published "Lang-An American Guerrilla on Mindando P I" and followed that a year later with "A Full Measure" which recounts the military history of nine more WWII veterans.

Norman is survived by his wife Ann, (recently celebrating 66 years of marriage), one daughter Ann Michelle Rupiper (Mark Eshleman) of Land O' Lakes, Florida and her children Lauren (Patrick) Hope and Nathan (Sarah) Rupiper, all of Memphis, Tennessee, and one son Chris (Kelly) and their two children Sara and Jarrett Rathka all of Mishawaka, Indiana and twin great grandchildren Hailey and Peyton Hope.

He was preceded in death by his parents, five brothers, and five sisters.

There will be a gathering of friends and family from 4-6:00 PM Monday, November 21, at Grandon Funeral and Cremation Care, 414 Lincoln Way, Ames Iowa, following a private family burial in the Columbarium at the Ames Municipal Cemetery.


Posting as Who are you posting as?

Dear Ann and Family,
My sympathies to you. A very sad time to lose our loved ones, neighbors and friends.
Norm was noted for great Christmas parties and for his many contributions Ames.
It should be noted that Norm did a great deed for our veterans telling their stories and making people aware of the sacrifices made by them.
Remembering the day Norm wheeled a wagon load of books to my home, I gave to friends.
Both solid republican.
We will miss you Norm but your books will live on
Ed Hendrickson
Okoboji

I am so thankful to Mr. Rudi for seeking out my father, Richard B. Lang, and putting his experiences as a soldier fighting guerilla warfare on Mindanao, Philippine Islands during WWII in writing. It is something my family will always treasure as Dad was unable to talk about it with his family. With my deepest sympathy, Judy Reischauer

Ben and I extend our deepest sympathy to Ann and family. Norman and Ann were long-time neighbors and friends who brought a sense of community and strong leadership to all they did.

So sorry Ann to hear of Norm’s passing. He was a very accomplished person and he will be missed not only by his family but the community in general.
Pat Stephenson

Norm and Ann were long time family friends and stalwarts for the Ames Community. Among my favorite memories of Norm was his frequent attendance with my Uncle Howard Hildebrand and dad, Bob Hildebrand attending the Drake Relays. Norm's wit, wisdom and stories were as much a part of this outing as were the martinis at lunch time! Howard, Dad, Norm and others were loyal Cyclone fans and I imagine they'll be together again on football Saturday's. Rest in Peace Norm, prayers to Ann and family. Tom Hildebrand

The attached photos are added to the memorial of Norman Herbert Rudi to help share their legacy.

Thank you for sharing your memory of Norman